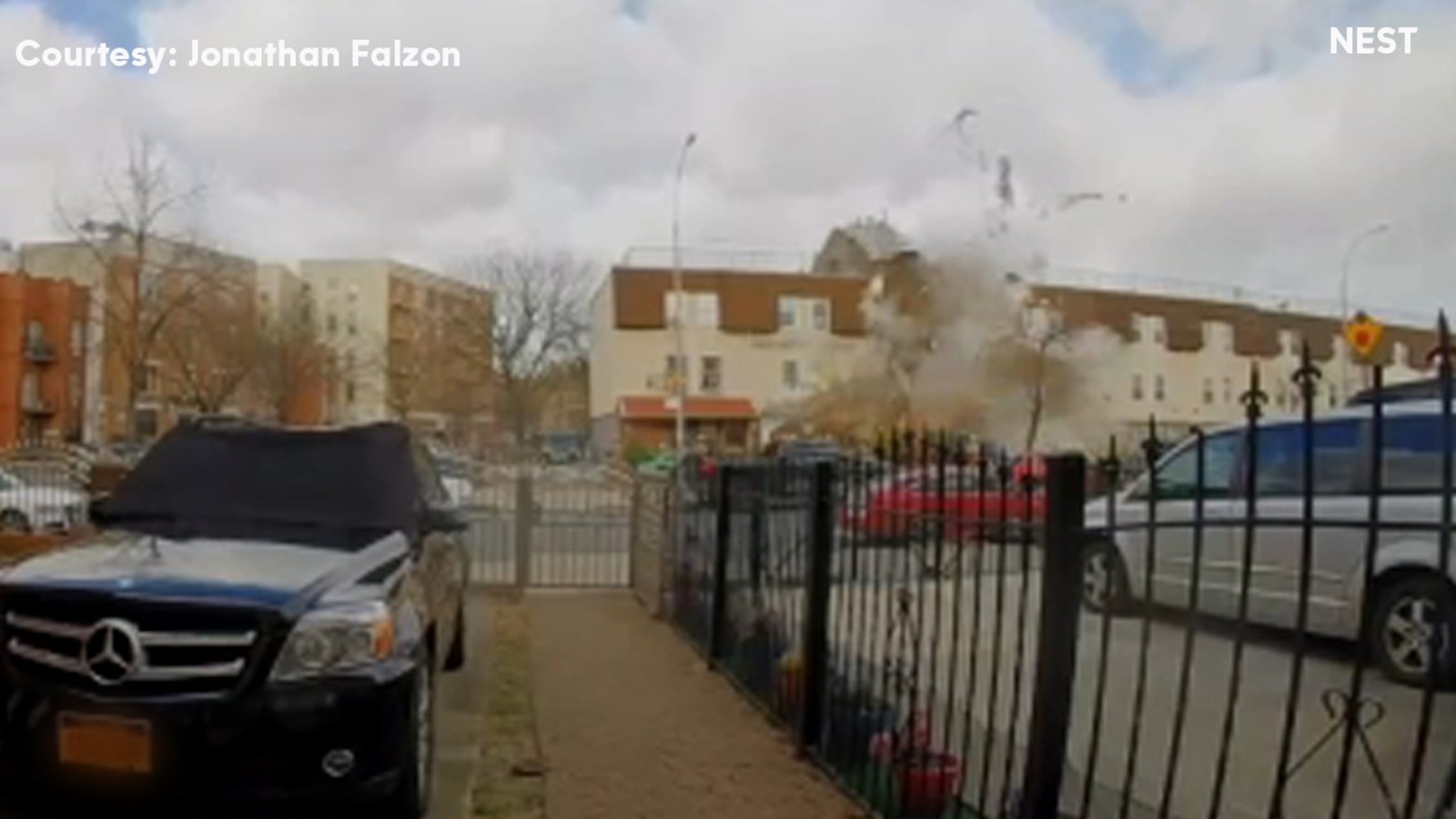 Police do not suspect foul play and neighbors say they smelled gas before the house exploded and collapsed around 11am on Tuesday.

A neighbor’s doorbell camera captured the moment the house exploded on Fox Street.

Four homes will now have to be demolished as a result of the blast, New York City Councilman Rafael Salamanca, Jr.

The fire certainly has the characteristics of a gas explosion, but authorities have not said for sure. It’s still under investigation.

Police said three women aged between 68 and 82 were inside at the time of the incident – the victim, her neighbor and her sister.

Two of them are currently being treated at Jacobi Hospital and are believed to be stable, but a 79-year-old woman, Martha Dagbatsa, has been pronounced dead.

Before the building collapsed, a dramatic rescue was caught on police body camera as they rushed to rescue Dagbsta’s 68-year-old neighbour.

Neighbors heard screams and officers rushed to rescue the woman trapped under a couch.

Hero officer Captain Anthony Macias said his only thought was how to get her out safely.

“The ground was crumbling under our feet and below we could see small flames,” Macias said.

The officers didn’t even stop to think about the fact that the whole house might have fallen on top of them or that another explosion might have followed.

“Like I said, when you see the body camera video, you’re going to see the quick response of the officers, walking into a burning building, next to the explosion, not realizing if there would be had an additional explosion. They went inside and took out a woman who was trapped inside,” Mayor Eric Adams said.

Five of these officers were slightly injured.

Now friends, family and neighbors must mourn a Dagbatsa, who is well known in the neighborhood.

“She is like a mother to me, we were in church when we found out and the one I was afraid to tell was my mother,” her friend Jose Rojas said.

Rojas said Dagbatsa is from West Africa and a close friend of his 86-year-old mother.

“She only spoke English and my mother spoke Spanish, somehow they communicated with each other,” Rojas said. “Don’t ask me how. They knew what the other was saying. They were breaking bread most of the time every lunch.”

His family released the following statement which said in part:

“We have lost Mrs. Martha Dagbatsa, 79, a devoted wife, mother, grandmother, aunt and sister. We mourn her departure from this world but take comfort in knowing that she rests in peace with our Lord in heaven. Thank you to everyone who contacted the family to offer their condolences. We are happy to report that Mrs. Dagbatsa’s sister, who survived the incident, is doing well and is on the road to recovery. Thank you to community members Christopher Rodriguez and Benancio Caba for your heroic actions, taking immediate action and helping victims get to safety Thank you to the brave first responders of the NYPD, FDNY and EMS We pray for a speedy recovery wounded officers from the 41st Precinct. We are glad our neighbors on and around Fox St. are doing well and are saddened that some of you have lost or been driven from your homes. We pray for you and your families.

The best iPhone accessories to buy for 2022