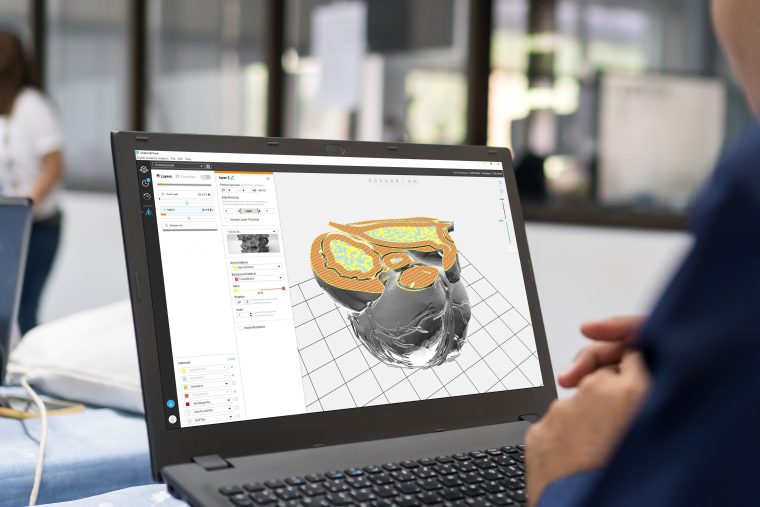 Along with the new software module, the company has partnered with third-party software vendors Synopsys ‘Simpleware ScanIP Medical and Materialize’ Mimics inPrint to certify that its Digital Anatomy and J5 MediJet printers will be included in approved medical modeling workflows by FDA 510 (k).

Elsewhere, the recently launched H350 3D printer by Stratasys has also been exploited by German design company DQBD to produce fully customized cycling saddles that provide increased comfort and performance efficiency over those produced by traditional methods, while reducing production times and costs.

The Stratasys Digital Anatomy 3D printer was initially launched in 2016 for the production of anatomical models for the medical sector. Since then, the printer has been validated by the worldwide Pantone Color Authority and received medical upgrades, including the ability to create models that mimic human bone.

The company launched its J5 MediJet 3D printer in June this year, designed specifically for medical applications such as patient-specific anatomical models, surgical guides, and medical tools. The color system uses Stratasys PolyJet technology and is compatible with a wide range of sterilizable and biocompatible 3D printing resins.

Now, Stratasys is enhancing the capacity of its medical machines with a new software module, the Digital Anatomy Creator, which allows users to produce patient-specific anatomical models that are a direct replica of a patient’s anatomy.

Thanks to the module, users can easily manipulate the material formations and customize the internal structures of their prints with additional options and controls. This capability allows users to calibrate the materials of their printers to meet the specific requirements of each anatomical model, in order to customize and produce ultra-realistic models that behave and respond like the real thing.

The Digital Anatomy Creator also allows users to create, replicate and share designs within a community dedicated to patient-specific anatomies for a wide range of applications, from diagnostics to patient education.

â€œThe Digital Anatomy Creator is the missing link between the patient, the printer and the final printed 3D anatomical model,â€ said Seth Friedman, head of innovation, imaging and simulation modeling for the Seattle Children’s Hospital. “This new software has allowed us to personalize our anatomical models to a mind-blowing level – we can now provide a truly personalized level of care to each of our patients, which is really important when working with children and their caregivers.”

Along with the introduction of the new module, Stratasys has certified its Digital Anatomy and J5 MediJet 3D printers for inclusion in FDA 510 (k) approved medical modeling workflows, through partnerships with third-party software vendors. . Synopsys Simpleware ScanIP Medical software and Materialize Mimics inPrint software will provide Stratasys customers with access to workflows for diagnostic anatomical modeling and point-of-care 3D printing.

â€œWe are continuing our journey towards accessible, accurate and realistic 3D medical modeling by deepening our flexibility in structural pathology with the introduction of the Digital Anatomy Creator module and by validating our digital workflow with third-party segmentation software with the FDA 510 (k) clearance, â€said Osnat Philipp, vice president, Health, for Stratasys.

â€œOur solutions empower providers to deliver world-class healthcare that leads to better outcomes and sets a new level of care. “

Optimizing the production of cycling saddles

Now moving away from the medical industry, Stratasys has revealed how its recently launched H350 3D printer has been harnessed to produce custom cycling saddles on a large scale.

Unveiled in April, the H350 is powered by Stratasys Selective Absorption Fusion (SAF) technology, based on a high-speed sintering process originally developed by Xaar, which Stratasys acquired in October.

The H350 was deployed by DQBD to produce fully customized bicycle saddles that would deliver a higher level of comfort and performance efficiency than regular saddles. The design company 3D prints a number of saddle load-bearing parts to scale using the machine, and says Stratasys’ SAF technology has so far saved them up to 22 Â£ 000 while reducing the lead time from six months to just 10 days compared to injection molding processes.

â€œWe have always envisioned additive manufacturing to play a central role in the creation of SAM – our bicycle saddle,â€ said Sebastian Hess, CEO of DQBD. â€œIn fact, we designed the saddle with additive manufacturing in mind. In addition to delivering consistently accurate and volume production quality parts quickly and affordably, the technology offers a unique opportunity to personalize products in a way that cannot be replicated with traditional methods.

The SAM saddle is composed of a personalized semi-rigid spine in 3D printed PA11 and a 3D thermoformed seat cushion. DQBD uses software mapping of pressure points and weight distribution to match the geometry of the saddle with the rider’s body and riding position, while the composition of the rigid and flexible areas within the printed spine 3D saddle provides support and fit where it’s needed.

According to DQBD, the combination of rigid and flexible zones will provide a higher level of comfort to the rider, while reducing fatigue. The entire saddle is also glue-free, which means that the components can be easily separated and returned to production at the end of the saddle’s life.

â€œWe are clearly seeing a trend in the readiness of companies for volume production of end-use parts,â€ said Yann Rageul, EMEA and Asia Manufacturing Business Unit Manager at Stratasys. â€œDQBD shows how the H350 and its SAF technology can not only optimize the entire production process with valuable time and money savings, but also shows the deployment of additive manufacturing for truly unique and advanced designs – ready. for large-scale production.

Subscribe to 3D Printing Industry Bulletin for the latest additive manufacturing news. You can also stay connected by following us on Twitter and love us on Facebook.

Looking for a career in additive manufacturing? Visit 3D printing works for a selection of roles in the industry.

A trip to Deng Xiaoping’s former residence, a fabulous experience