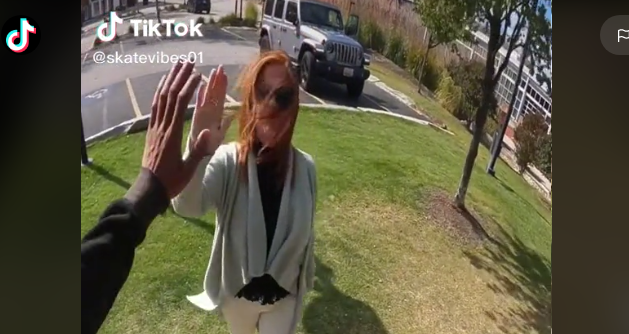 Last week, Asen Gyenyame, a lifeguard at Riverside Park Pool who can often be seen skateboarding in South Baltimore, posted a video on his TikTok page of local real estate agent Alyssia Essig giving him a few words of ‘encouragement. The video has now been viewed 8.8 million times and garnered 2.3 million likes.

Gyenyame, who often skates in Riverside Park or the Baltimore Museum of Industry, posts video clips of his latest tricks on his YouTube page (Skate Vibes) and social media accounts. He puts his iPhone on a tripod and has a camera attached to his head to capture the videos.

Earlier this month, Gyenyame was trying nightmarish flips (double kickflip pop-shuvit) under the gazebo at the Baltimore Museum of Industry. While eating his lunch in the parking lot, Essig saw his dedication and decided to give him a pep talk.

Gyenyame posted a video of their interaction titled “She’s the best”.

The two then congratulated each other and Essig said, “Have a good Sunday.”

Gyenyame added captions to the video which read, â€œWe need more people like thisâ€ and â€œfelt super inspired and then landed two after this conversationâ€.

WMAR brought Essig and Gyenyame together in a heartwarming segment last week. Both were touched by the positive interactions received from people who viewed the video.

About the Author: Kevin Lynch

Founder and Publisher of SouthBmore.com, longtime South Baltimore resident and graduate of Towson University. Unconditional fan of Ravens and O, father of three, amateur pizzaiolo, skateboarder and “bar food” gourmet. Write to me at [emailÂ protected] and follow me on Twitter at @SoBoKevin.