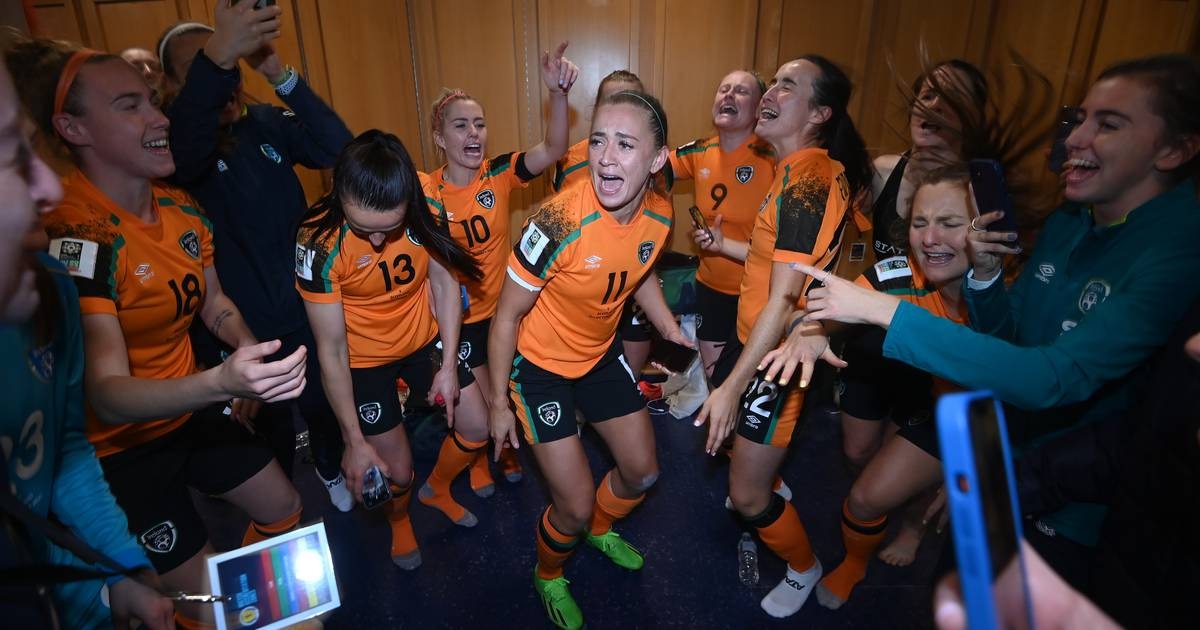 Do not worry. This is not another column worrying about our football team’s post-game song policy. No one here will be asking the women’s team to scratch themselves with sharp poppies by Remembrance Sunday. But history reminds us how quickly any perceived offense can now travel halfway around the world. We have technology to blame. We have ourselves to blame. We want to call the current craze for self-monitoring “Orwellian”, but this author has never imagined anything so improbable. We have become our own Big Brother.

In the unlikely event you need a reminder, the team found themselves in hot water when, after their heroic defeat of Scotland, footage emerged of them screaming the words “Oo, ah Up the ‘Ra!” in their dressing room. The apostrophe in the last quoted word replaces an “I”. Vera Pauw, the team’s manager, emerged almost immediately with a seemingly heartfelt apology. Fair enough.

While I’d love to live up to expectations, there’s not much more to say about the politics of the celebration itself. And, alas, I’m also not allowed to dwell on the fact that few people now recognize the origins of the vocals in a 1979 song by The Gap Band. There was a lot of talk last week about his appearance in Wolfe Tones’ Celtic Symphony, but little recognition was given to the immortal Oops upside down. (“Oops backwards. I said: oops backwards.” Get it?) Only musicologists who trace nursery rhymes to the Black Death now seem to care.

I can already feel you stepping back towards the exit.

The case reminds us, however, how difficult it is for anyone in the public eye – and far less exposed – to get away with the slightest error in judgement. Without making too many rash assumptions about where we haven’t been, we can reasonably assume that all sorts of scary things have been said and done in men’s locker rooms over the decades. The bizarre racist joke may have fallen from the otherwise unimpeachable lips of professional footballers. Songs about opposing teams can sometimes have gone beyond playful disagreement. No one was there to broadcast it.

Video and audio recording is now ubiquitous. Actors are often advised to assume, when in the presence of reporters, that everything they say – no matter what assurances are given – is “recorded”. They and other celebrities now move into a world in which everyone is a potential reporter, none of whom work under an editor with a lenient edge.

[ Irish team being ‘persecuted and bullied’ for singing ‘ooh ah up the ‘Ra’, songwriter says ]

The recent experiences of Finnish Prime Minister Sanna Marin are a good example. Footage of her doing nothing more dreadful than dancing at a party sparked still baffling kerfuffle after landing on social media. Some of us have wondered why video footage of balding middle-aged presidents and prime ministers playing stupid golf hasn’t sparked the same outrage, but no sane person is claiming that we live in a just world. Ms. Marin, absurdly, felt compelled to take a drug test. She passed away and resumed the job of leading the country. She could be forgiven for believing that she was doing nothing more controversial than taking out the trash, cutting up a carrot, or, well, playing golf.

Indeed, Ms. Marin’s actions seem to suggest that she was consciously posing for the camera. To move further away from Orwell’s eponymous adjective, many of these embarrassments stem not from surreptitious surveillance, but from the fact that the subject voluntarily participates in the recording. This should come as no surprise. Millions of people document their every move on Instagram and TikTok. It’s not uncommon for users of the latter to get into a sudden, voidable controversy. Say something vaguely racist – or something that could pass for racist – and, within hours, the crowd can drag you back to a life lived in the real world.

The combination of ubiquitous cameras and readily available social media is an ongoing nightmare for anyone capable of making forgivable mistakes (that is, all of us). It’s a nightmare for anyone acting in a perfectly reasonable way that allows bad faith observers to misrepresent them as having made such mistakes (so does all of us). Every young person runs the risk of becoming the laughing stock of their school overnight. Every celebrity knows they could – with little provocation – be shamed in front of millions.

That’s no way to live a life. And it’s hard to see the risk dissipating anytime soon. Humans may still be living in a state of transition between a world closed to immediate broadcast and the current arrangement that allows any semi-private weakness to be quickly ridiculed internationally. A decade from now, we may have learned to guard our every word, action, and gesture. Now, doesn’t that sound like something worth waiting for?

10 cool new gadgets to keep on your radar