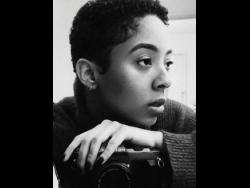 SAINT International’s Jamaican beauty Sabrina Nugent graces the cover of landmark American fashion publication black fashion show which launched its first issue, Volume 0: SEEN, last week to massive global fashion media coverage. With vogue praising the inaugural magazine as a “magnificent collection of black stories and talent” and Harper’s Bazaar trumpeting the designers, models and creatives featured between the pages as an important “emphasis on representation in fashion, while reimagining the image of culture through a black lens”, Nugent’s cover is a major moment for the teenager discovered just two years ago by SAINT General Manager Deiwght Peters at Tarrant High School.

Nugent stars on one of the magazine’s four different covers, with Puerto Rican models Joan Smalls and Angolan Maria Borges and rising Trinidadian model Aleya Ali on the other three. Founded by Antoine Gregory, black fashion show is a historic and comprehensive collection of fashion images that showcases emerging and established talent in design and art from around the world.

Talk with vogue last week about the arrival of black fashion show, Gregory said, “There are so many different elements that go into this post. It shows the diversity of the black experience globally. I didn’t just want a seat at the table. I wanted to create my own table, and there were seats for everyone. This is the proof. »

I LIKED THE INITIATIVE

On a mission for Nugent’s black fashion show cover and accompanying editorial inside was London-based Jamaican photographer Amber Pinkerton, who narrated The Sunday Gleaner the origin of his involvement. “Demand started to brew around last November,” she explained. “Stylist and casting director Jonathan Johnson asked me to collaborate with himself for the first issue, which focused on London designers. I know the team was a fan of my work, and I loved the initiative and the opportunity to work with Jonathan. So it was a complete victory.

A trip to shoot on location at home was fortuitously scheduled for Pinkerton. “The story should have been shot in London originally,” revealed the photographer whose career took off with The New York Times, Dizzy and Document Log, all featuring rhapsodic profiles on her. “I had a crazy thought one day – ‘what if I offered to shoot in Jamaica’ which seemed like a crazy and impossible idea due to time and logistics. After looking at the list of creators, I thought that it was just a perfect match based on the brands heritage and cultural interests. I was over the moon when I was given the green light.” The UK designers’ appeal included shelves of clothing and accessories from Wales Bonner, Bianca Saunders, Jawara Alleyne, Mowalola, Selasi and Marvin Desroc.

For her new rock-centric fashion project, which was her second collaboration with SAINT after a highly acclaimed editorial on the agency’s models for identifier magazine in 2019, she made a deliberate effort to get back to her roots and primary work style. “I’ve worked overseas for so long that I needed this rejuvenation and to get back to my more simplistic approach to filming – keeping it small, less contrived and more spontaneous. I really miss it sometimes.

“My photographic process varies depending on what and for whom I photograph. Some projects, like this one, allowed me to work more fluidly. We had mood boards and ideas, but nothing was planned to perfection – it’s about leaving it to chance,” she added.

Also appearing in the editorial shot with Pinkerton in Ocho Rios and Papine is rising SAINT model Selah McHail, who made her international fashion breakthrough last year with an Adidas/Wales Bonner ad campaign that was also shot in Jamaica.