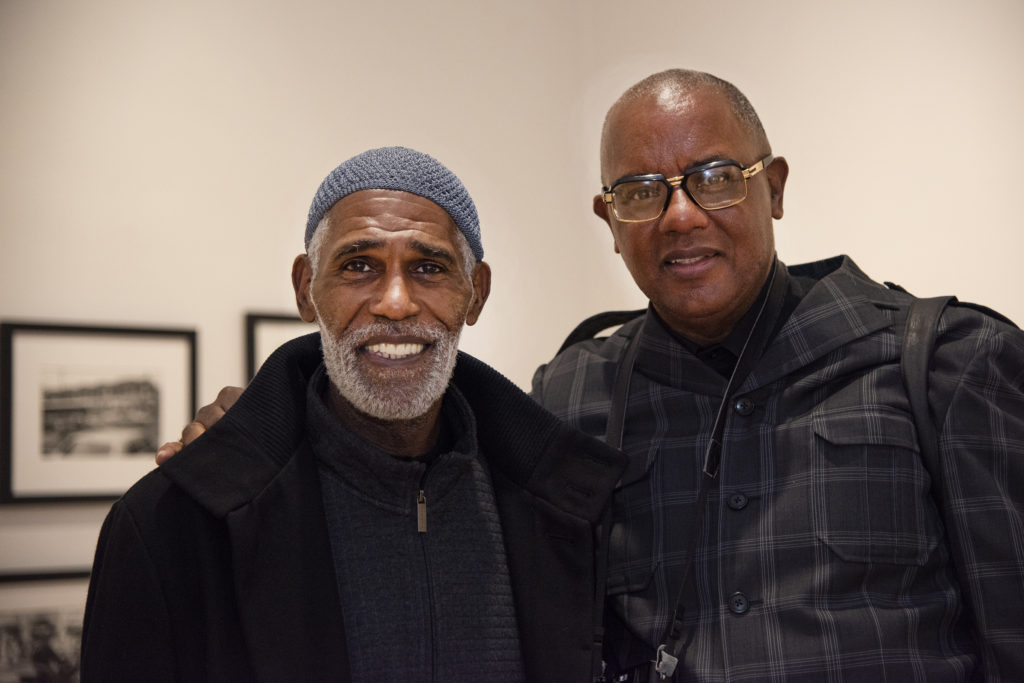 By JOSE A. GIRALT

A steady stream of family, friends and fans fills the Bronx Museum of the Arts an hour before the exhibition, “Eyes on the Street” opens for a private reception at 6 p.m., Tuesday, 5 april. Reviews of the retrospective exhibition four decades of photographs by Jamel Shabazz.

“It’s a joy to be here in the Bronx,” Shabazz said. Norwood News at the opening of the exhibition. “This great institution has always been so kind to me. It was the Bronx Museum that gave me one of my most important exhibits maybe 15 years ago…. They have always respected the work I have done [so] I am honored to be here.

The body of photographic work created by Shabazz is impressive. His work falls squarely within the genre of documentary and within the subcategory of street photography. The exhibit also serves as a historical record of how New York City has evolved since 1980. Curated by the museum’s own Sergio Bessa, the exhibit spans Shabazz’s career from 1980 to 2020.

Photographs from the 80s are sure to elicit smiles and laughter from visitors too young to remember a time when Kangol hats, Adidas tracksuits and Cazal eyewear dominated street styles. But while the clothing and props have changed, where Shabazz excels is capturing the humanity he sees in front of his lens.

A common characteristic throughout his photographic journey is how often the people he photographs seem comfortable when he presses his shutter. Historically, street photography has often focused on the more tragic or darker aspects of life, whether it be homelessness, drug addiction or crime. Conflict and tension are also often key elements in the work of influential documentary photographers like Leonard Freed and Gordon Parks, whom Shabazz credits with inspiring some of his work.

In March 1968, an article titled “A Harlem Family” appeared in LIFE magazine with photographs and text by Parks, described by National geographic as “one of the most influential twentieth-century interpreters of African-American life and culture”.

A current summary of the Harlem family’s history describes the faces of the profiled family as “showing despair, anguish, deep weariness, and grim perseverance.” Parks wrote in 1968: “For I am you, looking behind a mirror of poverty and despair, revolt and freedom. Look at me and know that to destroy me is to destroy yourself…. I too am America. America is me.

Parks was a master of photography and was equally famous for capturing high fashion models on the pages of LIFE magazine. However, his documentary work, at least the work he is best known for, captures a black America exhausted by “poverty and despair”.

Shabazz, on the other hand, roams the streets of some of the five boroughs’ poorest neighborhoods and gets the subjects, mostly teenagers and young adults, to preen, preen, and generally strike a pose of confidence and bravado.

The streets he walked display a fresh style, rich in originality, yet his interactions with his subjects seem to spark a positivity rarely associated with street photography.

On Instagram, Shabazz has over 148,000 followers. One of them, Carmelo Nieves, was present at the opening of the show to support the photographer who, in turn, inspired him and others. “I want to be Jamel Shabazz,” Nieves said, before letting out a good-natured laugh. At 45, he met Shabazz in 2018 at Photoville, an annual free outdoor photo festival hosted by Brooklyn Bridge Park.

As a fellow street photographer, Nieves considers Shabazz’s work inspirational. “I finally met him at Photoville [and] one, it was an honor,” Nieves said. “I want to emulate what he does, but just take it to another level.”

Working as a prison officer on Rikers Island gave Shabazz a visceral view of how life on the streets can become a terrible turning point for some, drawing them into crime. Bedford Park resident Earl Gray spent years as a fellow officer with Shabazz, both rising to the rank of captain.

“We shared the journey of our correction together,” Gray said. The two men, now retired from the department, have known each other since the 1980s.[Photography] was his dream; it was his passion,” Gray said. “That’s where his love is.”

Photographs from the 80s will also remind viewers of the abundance of empty lots filled with garbage, subway cars covered in graffiti, and children jumping on mattresses thrown away as a leisure activity. But it is our common humanity that connects faces and places, the need to play, to socialize, to feel that our lives matter and deserve to be captured for posterity. It was a necessity in 1980, as in 2020 and today.

However, Shabazz isn’t tethered to the past as if his greatest moments are commemorated in gelatin silver or chromogenic prints. When asked about her fondest memory from her photography tour in the Bronx, Shabazz quickly replies, “It should be today.”

Recognizing that the City is going through another difficult period, he is grateful that this exhibition is presented in the borough. “It would be one of the fondest memories I have of the Bronx, to be here in 2022, with all that is happening in the city and around the world, and seeing people come together in the spirit of love and unity.”

Jamel Shabazz: eyes in the street is on view until September 4. It is part of the Bronx Museum of the Arts’ 50th anniversary celebration.