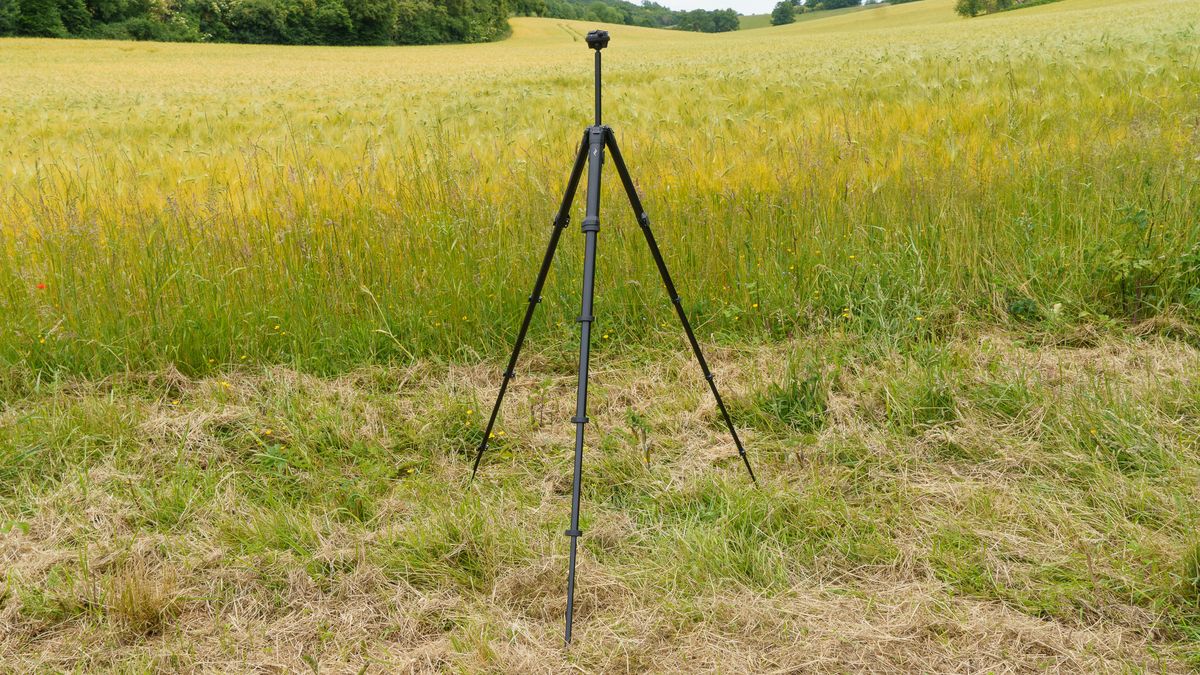 Peak Design offers two versions of the travel tripod, one in carbon fiber (£599/$649.95) and the other, reviewed here, in aluminium. Aside from the pattern of the carbon fiber weave, both tripods look identical and have the same maximum and minimum heights, but at 1.56kg the aluminum version weighs 290g more than the carbon fiber version ( see our separate review of the Peak Design Travel Carbon Fiber Tripod (opens in a new tab)).

The travel tripod has 5 section legs that allow it to fold down to 39.1cm, but its narrow diameter of less than 8cm is what really impresses. Rather than round, the leg tubes are shaped to fit tightly around the center column to reduce packaged diameter.

Peak Design used a very unusual design for the tripod head as the ball is visible at the top of the center column below the pivoting top section with the release plate clamp. When the tripod is fully folded, the ball is surrounded by the top of the legs, and the three spacers that secure the clamp to it fit snugly between the legs. This means that the center column must be extended a bit before the head can be moved.

The Peak design provides the tripod with a double hex key tool and expandable bag. Also, if you remove the hook at the bottom of the center column, you will find a phone holder that can replace the Arca-Swiss quick release plate in the clamp.

Due to the unusual shape of the legs and the new head design, the Peak Design Travel Tripod is quite different from other tripods, but it feels great and the aluminum legs are sturdy.

The legs have clip locks and it is easy to open all four locks on one leg in one motion. This, added to the fact that the legs don’t flip over the head and the central column for storage, means the tripod can be ready to use in seconds.

The center column is locked and unlocked using the small knob located between the tops of two of the legs. Once the column has been extended slightly, the tripod head can be tilted for shooting. A knurled ring above the headball locks and unlocks head movement, and just above there is a lock for the quick release plate.

Peak Design used the same Arca-Swiss compatible quick release plate used for their clips. It requires a hex wrench to mount it on a camera, and the included tool comes in handy. However, this tool slips quite easily out of its plastic holder on one of the legs, especially if the tripod is inverted for some reason.

Many backpacks have a side pocket to carry a water bottle, and the Peak Design Travel Tripod fits nicely. Alternatively, there are mounting points on the tripod and its bag for Peak Design’s anchor loops to attach one of the company’s straps.

Peak Design spent four years developing the Travel tripod, and it was clearly time well spent as it’s a great tripod. It can handle a maximum payload of 9.1kg, and I captured sharp long-exposure images using it to support a full-frame mirrorless camera with a 70-200mm f/2.8 lens. It even delivered sharp long exposure results with a medium format camera.

The only weak point I encountered is the quick release plate mount on the camera. If the camera is in landscape orientation, that’s fine, but if the camera or lens is very heavy and you’re shooting in portrait orientation, it’s hard to get the plate tight enough to keep it from slipping. slip.

In terms of performance, it’s hard to discern a difference between the aluminum and carbon fiber versions of the tripod. However, even when the tripod is added to a backpack full of camera gear, it’s possible to tell the difference in weight between the two models.

With a price difference of around $270 between the carbon fiber and aluminum versions of the Peak Design Travel Tripod, the Aluminum Tripod makes a desirable alternative to its more expensive sibling. The difference in weight, 290g, is noticeable, but it’s about the same as a bottle of water. If you’re going to be traveling long distances, the carbon fiber version may be more attractive, but many photographers will be happy to accept the extra weight for the cost savings.

Whichever model you opt for, the Peak Design Travel Tripod is an incredibly well-designed and well-made tripod. It’s small and light enough to take on most photography expeditions, and it’s ready to go in seconds.

THE BEST OFFERS OF THE DAY

How to use Continuity Camera on macOS Ventura and iOS 16