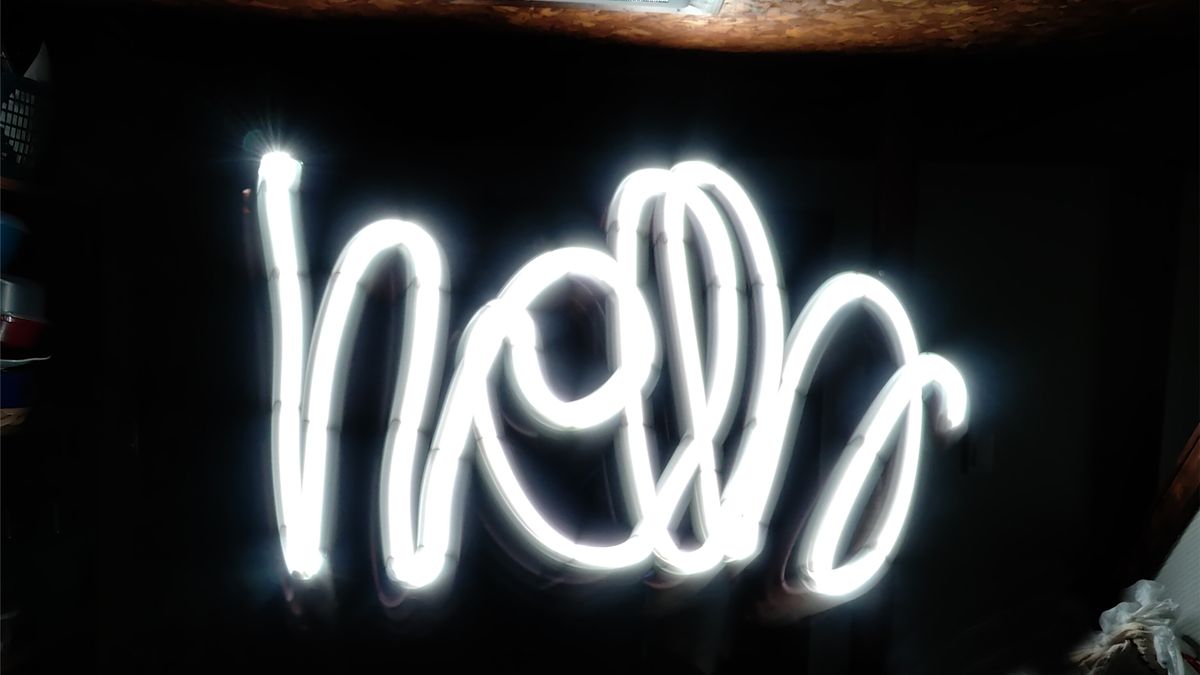 I can draw with light.

A few days after receiving the OnePlus 10 Pro 5G, a solid if not quite exciting Android smartphone that offers Pro-level features at a flagship price, I started digging into the features of the camera app.

I’ve long been a fan of OnePlus and its big camera swings. It was the first smartphone I ever used, for example, to offer macro photography. I loved taking close-up photos of the interiors of flowers, insects and water drops. Not everyone liked it, however, and the OnePlus 10 Pro doesn’t include a macro camera. It has a long exposure though.

Most smartphones now offer some form of night photography or long exposure settings after Google started the trend in 2018 with Night Sight on its Pixel 3. The wide variety of long exposure night shooting options today includes presets and sometimes some level of control. to extend the exposure (more if you put the phone on a tripod).

While I’m happy to use manual settings to try and capture stars (I do a lot of DSLR photography), I love it when smartphone makers combine the best they can offer when it comes to lenses and sensors with software and algorithms to make what would normally be complicated simple.

And, to be honest, I’ve tried capturing certain types of long-exposure photos on every smartphone I’ve tested in recent years, with varying degrees of success.

Here’s what I want: streets with nothing but whistling car headlights. People scrambled past me while the rest of the world stood still. Light art.

With the OnePlus 10 Pro Long Exposure setting, I accomplished all three.

As I mentioned, the setting is fairly easy to find, but what’s more impressive is that it’s extremely simple to use (and also limited for the same reason).

You don’t have to choose the objective or the magnification. The default is the 48MP main camera, which for me is fine.

You also cannot choose the duration of the exposure. It is by default 5 seconds. I know, that doesn’t sound like much, and I had no illusions about catching the stars spinning overhead at night. That said, a lot can happen in five seconds and I was hoping to be able to capture it all in pictures.

I couldn’t think of a better place to test this theory than on the busy streets of Manhattan at night.

Five seconds isn’t a lot of time, but it’s enough to get your hands and body shaking or moving. To capture the action, I had to stop, plant my feet, and hold on tight. I don’t remember if I held my breath or exhaled slowly.

I started by pointing the camera at other night commuters rushing towards me. In the unedited photo above, they’ve all turned into ethereal ghostly blurs of barely people. Still, the effect is mesmerizing.

Then I pointed the OnePlus 10 Pro towards traffic. For these shots, I stood on the sidewalk near the street and in one instance leaned on a pole to stabilize myself further. Looking for more traffic, I headed for an intersection. Five years ago, I couldn’t imagine capturing these kinds of images with a smartphone camera.

I tried another experiment. At a party with lots of party and wall lights, I tried to pass the phone next to them and go from partygoers to lights. I would say the results are intriguing and artistic, but not entirely useful.

As I mentioned, you don’t need a tripod to capture these images, but using one introduces another interesting photographic possibility.

I set the OnePlus timer for 10 seconds, then ran to stand in front of the camera. I could hear the OnePlus10 Pro counting down 10 seconds, but unlike an iPhone, it doesn’t flash the rear LED light to show you the countdown is in progress. It was a bit boring.

My goal was to move the iPhone as quickly as possible, hoping that the OnePlus’ long exposure would capture the trail in bright light.

I figured out how to write “hello” backwards and when the countdown ended, I quickly wrote it down. The result is not bad at all (I cropped the image a bit).

Then I made a spiral. It was lovely too. Next time I will use a different color light.

If I have one general criticism of the OnePlus Pro 10 5G’s long exposure preset, it’s that the image processing seems to take multiple long exposures and compile them into a single image. You can see it in the way the light breaks at regular intervals in the spiral or the way the car lights almost seem to stutter. Hopefully future software updates will alleviate this a bit.

I can, of course, dive in Pro mode and open the shutter for up to 32 seconds. It also means adjusting ISO and focus, though. For consumers, this long exposure preset is just enough and they should be able to create their own wild images with minimal fuss.