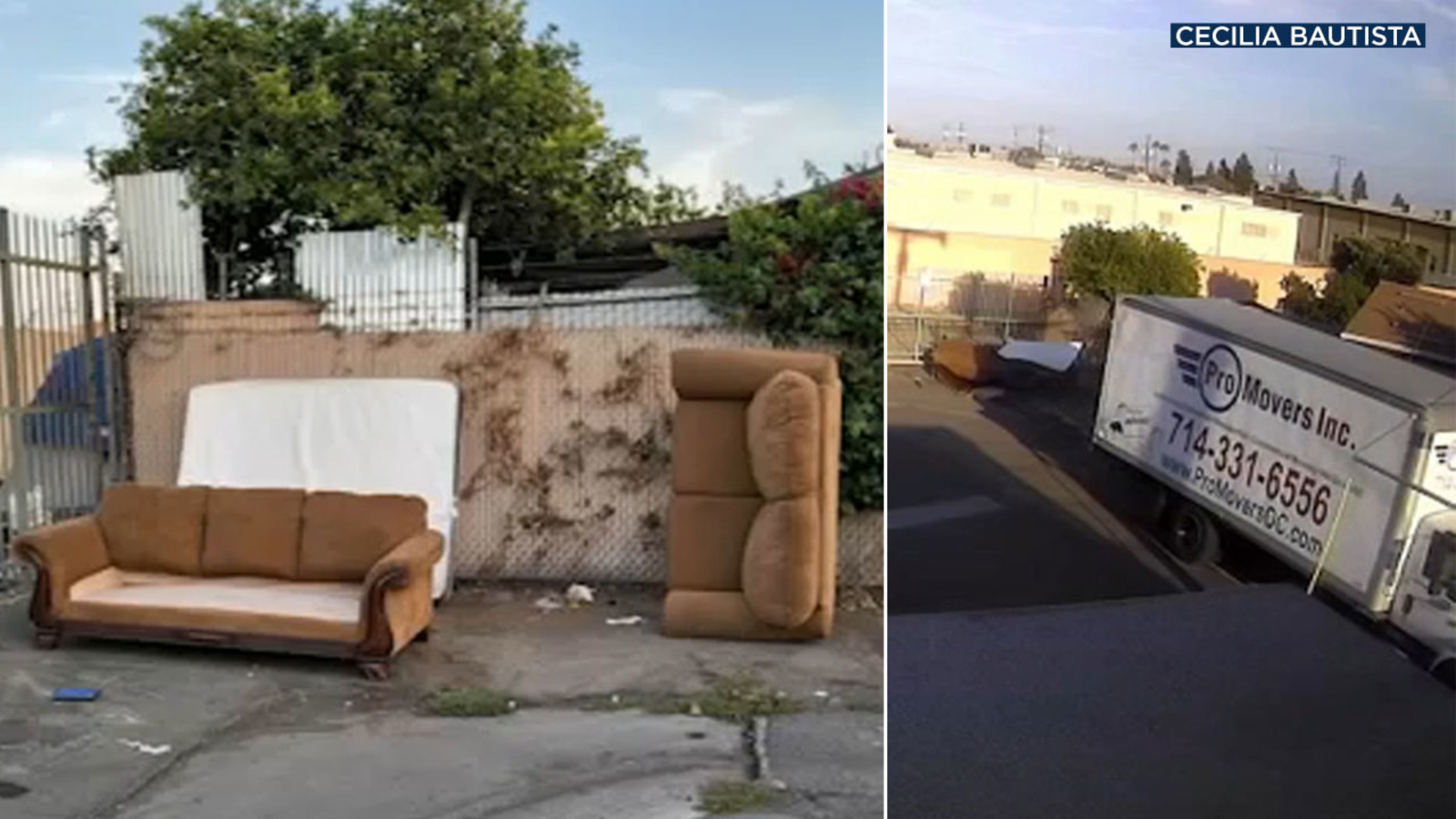 SANTA ANA, Calif. (KABC) — A community advocate has taken action after catching workers from a local moving company in a truck, apparently dumping unwanted furniture in his neighborhood.

In the tapes, a truck labeled PRO MOVERS INC. was seen leaving behind old sofas and mattresses in the driveway of Bautista’s apartment complex in the neighborhood known as Minnie Street.

“So I came out and said to the guy, ‘Don’t do this because I filmed you,’ and he started laughing,” Bautista said.

Bautista works alongside nonprofit organizations that advocate for the area to be cleaned up. They include the Green Madison Park Neighborhood Association, or Green MPNA, and Madres en Acción, which translates to Mothers in Action.

“We’ve had a problem with the train tracks, with a lot of homelessness in the area. A lot of that waste is pouring into these communities and our neighborhoods, but on top of that, on the other side of the train tracks , as you can see there are a lot of industries that are dumping chemicals into our air, into our water, into our soil…we really think the city should pay a lot more attention to this community because that for us it feels like this community is being neglected,” said Leonel Flores, environmental justice program manager for the Green MPNA.

Living through this for nearly two decades, Bautista said enough was enough.

“If they did it here, I don’t think it’s the first time,” Bautista said.

She said she was taking steps to improve the quality of life for her children and neighbors. She called the police and the moving company.

“The guy was very nice, polite and he told me he felt so sorry. He didn’t know and he said their guys, they’re not supposed to do that,” Bautista said.

As of Wednesday, a week after the recorded incident, the company had nearly 900 reviews on Yelp, with an overall rating of four and a half stars.

PROMOVERS INC. is a proud small business serving the City of Santa Ana and Orange County. With over 11 years of service and over 15,000 residential moves completed, it is unfortunate that this incident occurred. This is not a “best practice” that we model in our business as well as our neighbors in the community. We will reinforce our “Best Practices” with all our crews so that this does not happen again. Our management team has managed this situation internally with employees. Thank you to our community partners, the City of Santa Ana and the Santa Ana Police Department for bringing this to our attention.

In a phone conversation with Eyewitness News, Romero said the company received and paid a $100 fine from the Santa Ana police, but an SAPD spokesperson was unable to find out. confirm Wednesday at the end of the day.

Bautista said she received a call from SAPD last Thursday and an officer came to her home that Friday to retrieve videos, photos and details.

In an email, Romero told Eyewitness News that a team was sent to the scene the afternoon after the incident to retrieve the items.

Bautista said she didn’t think a city crew picked up the trash, but they did make an attempt.

“The next day I don’t know which company came to pick up all the big stuff and later someone from town called me and said they were going to send two trucks to pick up all the stuff but I told them someone did it,” Bautista said.

A city spokesperson told Eyewitness News on Wednesday that residents can report illegal dumping activity on the My Santa Ana App and the city’s response time averages less than 24 hours.

Bautista said she is working with several nonprofits to organize a neighborhood cleanup here in the coming weeks.