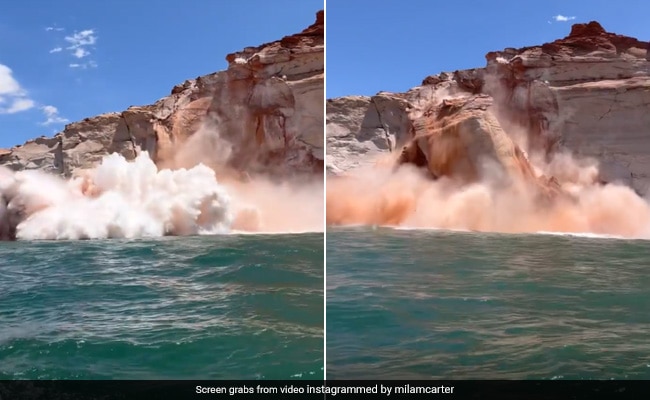 Lake Powell was formed when a dam was built across the Colorado River.

Boaters on Lake Powell in the United States recently filmed a huge sandstone cliff collapsing into the water. According CNNThe landslide occurred on the Utah side of the lake where water levels have continued to plunge due to relentless drought conditions plaguing much of the West.

Shared on Instagram, the dramatic video showed a huge rock on the side of the reservoir tilting towards the water below, before collapsing and sending a towering jet into the sky and big waves across the lake.

Talk to CNN, Mila Carter, who shot the video, said she was heading to Antelope Point Marina with her husband, Steve Carter, when they noticed rocks and sand falling from the cliff near the entrance to Warm Creek. . They stopped the boat and began taking photos and videos that captured the unfolding of the event.

Ms Mila said: ‘We didn’t expect anything like this. She also informed that when the cliff section came loose, her husband fled for safety. Additionally, she added that once the rock fell into the lake, a big wave formed. “I feel like the video didn’t capture the wave at the end. It was very impressive,” Ms Mila told the outlet.

According to IndependentJoseph Cook of the Arizona Geological Survey said the collapse may have been caused in part by the lake’s recent extremely low water levels. He said the splitting of the rock could have been exacerbated by being saturated with water and then drying out.

Lake Powell is located in northern Arizona and extends into southern Utah. It was formed during the construction of a dam on the Colorado River. As a result, areas of the Glen Canyon wall, naturally high above the river bed, were surrounded by water. However, a two-decade “mega-drought” has now wreaked havoc across the American West and caused the water level of Lake Powell to drop precipitously, leaving the canyon much emptier than before.