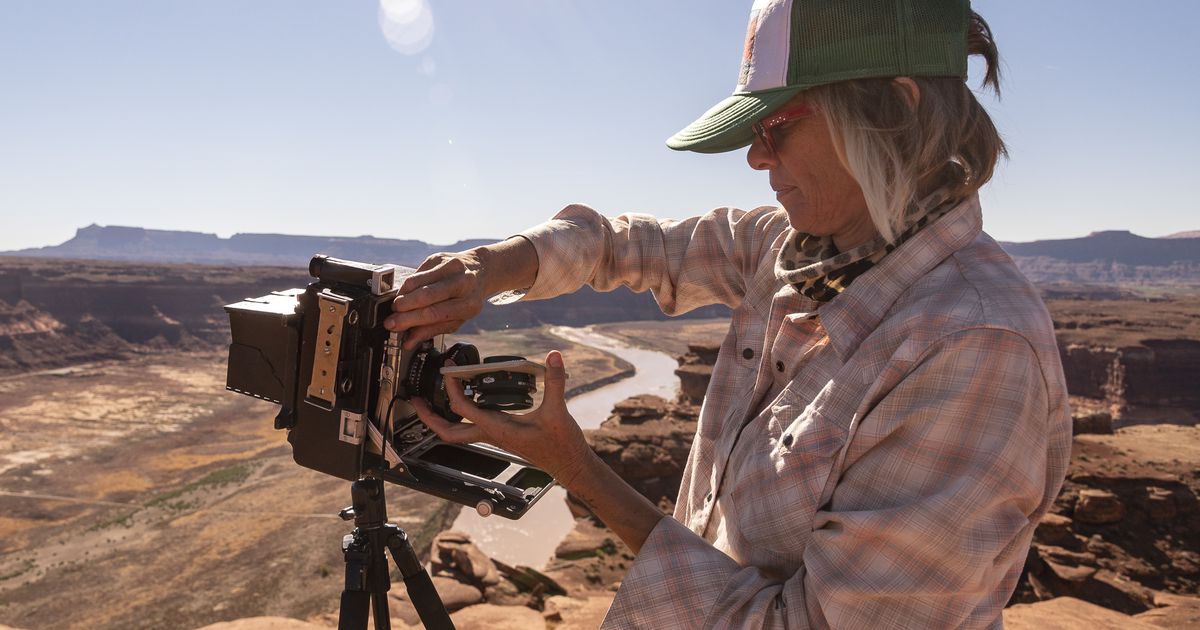 This article is part of a special issue on the future of Lake Powell, examining the reservoir as overuse and severe drought dry up the Colorado River. Learn more about life back to the side canyonsHow? ‘Or’ What the architect of the dam thought it could end and the case for removing the Glen Canyon Dam.

Lake Powell • Late on a scorching afternoon in early June, as the sun dipped below the Navajo sandstone cliffs that surround Lake Powell, photographer Dawn Kish set up a tripod.

She mounted a large-format 4×5 Crown Graphic camera, saw the upside-down landscape displayed in the viewfinder, and clicked the shutter.

Carefully removing the single negative film from the camera, Kish returned the camera to a waterproof bag labeled TAD.

The scene seemed anachronistic, especially as electronic music blared from a party on the upper deck of a nearby houseboat. Kish would have to wait until she got home to Flagstaff, Arizona before she could see how the image turned out, and with a cost of over $400 to make an impression, she chose her shots carefully.

The camera once belonged to Tad Nichols, whom Kish considers to have produced the greatest photographic record of Glen Canyon before it began to fill with water after the dam was completed in 1963.

Nichols studied landscape photography with Ansel Adams before taking his first trip through Glen Canyon in 1950 at the age of 39, and he returned for dozens of trips over the next 13 years.

“I was bitten by the canyon bug,” Nichols wrote in his 1999 book, “Glen Canyon: Images of a Lost World,” which was published months before his death.

But what started as exploration trips for Nichols soon became an effort to fight Glen Canyon Dam.

Her most frequent river companions were Frank Wright, a Mormon boatman from Blanding, and Katie Lee, a writer, folk singer and Hollywood starlet turned environmentalist firecracker, who posed nude in Glen Canyon for photographer Martin Koehler.

Nichols, Lee and Wright, who called themselves “We Three,” took their first trip together without customers in 1955, a year before the Colorado Rivers Storage Project Act authorized construction of the Glen Canyon Dam.

“It became apparent that the three of them were going to try to save Glen Canyon,” Kish said, “because they saw it would start to sink quickly.”

The trio took trips almost every year until the dam was completed. Many of the nearly 100 side canyons that would soon be flooded had not yet been named on official United States maps, and “We Three” set out to change that, giving names to at least 25 side canyons. which persist to this day, including Dangling Rope, Ribbon, Cathedral Canyons. (Others, like their name “Pink Titty Canyon,” didn’t stick; it’s now known as Antelope Canyon.)

When their advocacy efforts failed and Glen Canyon flooded, all three were heartbroken. Lee, with her penchant for lewd language and flair for righteous outrage, became the best known of the trio after writing books and songs about what she saw as an unforgivable act of violence against the natural world.

(In the 2014 film DamNation, Lee, then 90, said that if she had ever met arch dam builder and former Bureau of Reclamation commissioner Floyd Dominy, she would have “cut his balls off.”)

“Lee stole the show,” Kish said, noting that Nichols had a much softer personality than Lee. ” A little [Nichols] was the Ansel Adams of Glen Canyon. It’s time for him to be in the spotlight.

She considers “Glen Canyon: Images of a Lost World” to be the best photographic documentation of the most beautiful canyon in the Colorado River.

Continuing the work of a mentor, with his camera

Several years ago, Kish was offered Nichols’ 1950s camera by his friend and printer, Richard Jackson, but at first refused to take it.

But when Lake Powell levels plummeted last year after near-record runoff, Kish saw an opportunity to pursue a reversal of Nichols’ project. Instead of documenting Glen Canyon before it flooded, Kish is committed to photographing parts of the canyon that are uncovered with low water.

“When I found out that Glen Canyon was emerging,” she said, “I thought it would be the perfect project: to go back with her camera and explore Glen Canyon, a canyon I never thought see in my lifetime.”

Kish has made numerous trips to Lake Powell since, producing a series of stunning black and white photos that show what Glen Canyon looks like after 22 years of drought linked to climate change.

“I don’t try to copy what he did,” she says, “but I ask him to guide me all the time. I always try to channel it.

She sees the project, which she’s titled “Tad’s Emerging World,” as a continuation of Nichols’ mix of art and advocacy, which she hopes will help efforts to cap the level of Lake Powell well. below the full pool or empty it completely.

In addition to the photographs, which will be exhibited at Northern Arizona University and other exhibits in the Southwest later this year, she is working on a film project about Nichols and his camera.

“[Former Sierra Club director] David Brower said it was his biggest mistake to let Glen Canyon sink,” Kish said. “Perhaps we should plan to let the river flow freely now that Lake Powell is at record highs. I think mother nature is telling us something and we should listen for once.

The trailer for “Tad’s Emerging World” is available on YouTube, and Kish is raising funds to complete the full project on GoFundMe.