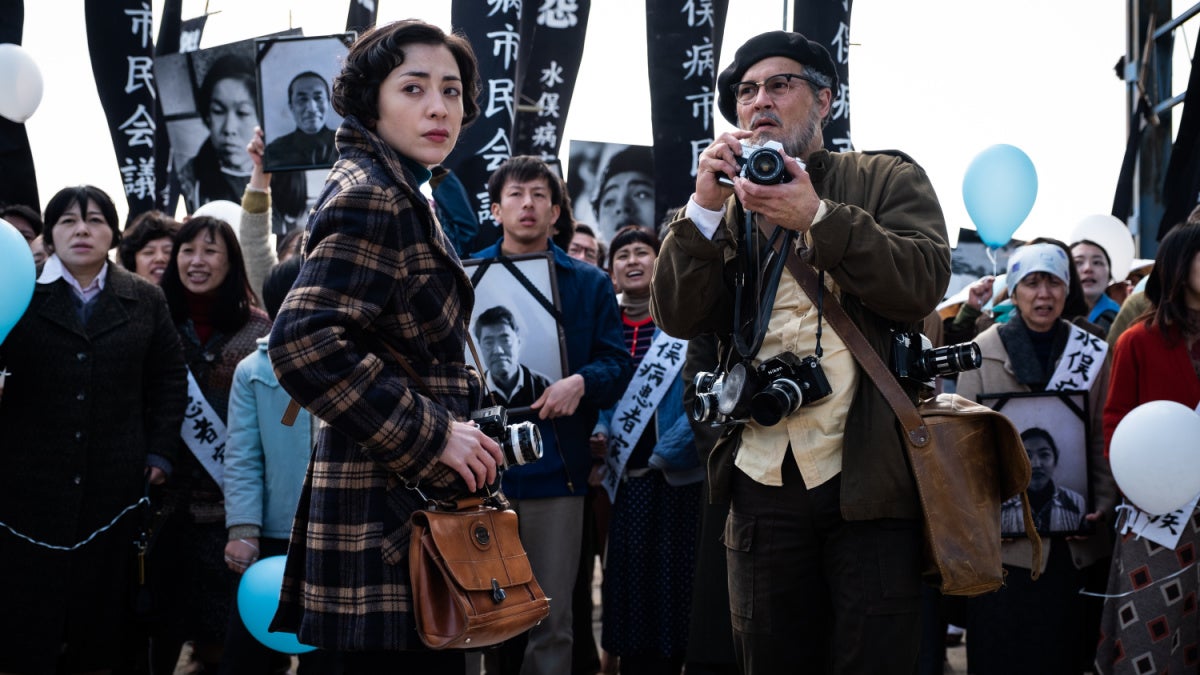 Johnny Depp photographs an environmental disaster in an urgent biopic

The greatest power of the photographic image is its function of influencing social change, a phenomenon which only persists and grows with the proliferation of cameras in all hands at all times. But with great power comes great responsibility, they say, a conundrum explored in Andrew Levitas’ “Minamata,” the story of legendary photojournalist W. Eugene Smith and his experiences photographing the effect of poisoning in toxic mercury in Japan.

Writers Levitas, David Kessler, Stephen Deuters and Jason Forman fudge the facts a bit to create this biopic of Smith, played here by a grizzled Johnny Depp, and the result sounds like ‘Erin Brockovich’ to ‘A Private War’, with a hint of “Fear and Loathing in Las Vegas” for flavor. (Depp’s Smith has the same penchant for paraphernalia and meth as his Hunter S. Thompson.)

We resume with Smith in 1971; he feuds with Robert Hayes (Bill Nighy), his editor at LIFE Magazine, relying on his legacy as a brilliant photojournalist who pioneered “photo reporting”, and also haunted by memories of his time in the Pacific during World War II. When a film crew from Fuji shows up on his doorstep to shoot a commercial, his interest in charming translator Aileen (Minami, “Battle Royale”) is strictly lustful.

However, they both have ulterior motives – Aileen wants him to come to Japan to document the deleterious effects of mercury pollution on the people of Minamata, who are suffering from a mysterious neurological disease due to toxic waste dumped by the Chisso chemical plant. Although Smith initially refuses, his keen sense of justice and his journalistic eye for a gripping story can’t keep him away.

“Minamata” unfolds as one would expect from a true story like this, in the narrative style of “Brockovich” or “Dark Waters”: a vulnerable population is harmed by corporate malfeasance; a crusading activist such as a lawyer or journalist takes up their cause and exposes wrongdoing in hopes of finding justice for the victims, or at least ending their persecution.

This film doesn’t break the mould, but at its center its unlikely hero is an often drunken photographer who needs more convincing than not pursuing this mission. Smith is blessed with a gruff charm and genuine affection for the people he meets, as well as an empathy for the suffering he sees around him.

A young Japanese boy suffering from Minamata disease becomes the character that warms us to Smith; Stuck outside watching other kids play football, Smith hands him a camera, which tells him to “play some music, kid.” This allows the boy to become part of the world watching him, but as he walks away, Smith mutters, “I don’t know if I can hear him anymore.”

Smith’s great power is his empathy for capturing images of war, pain and love that tell a story, but with every photo he takes he gives a part of himself to this relationship between subject and the object, this creative process. When we meet him, he has given so much of himself that he is nothing more than a shell.

While one could see Depp’s performance here as a continuation of the wild, creative Hunter S. Thompson type he’s so known for, it’s his most tender and mature work in years. Minami, as Smith’s future wife, Aileen, has a powerful screen presence, but the two together lack a palpable chemistry, and they sometimes seem disjointed, as if they aren’t playing the same song. This disconnect reflects Smith’s experience in Japan, groping in that situation without speaking the language. It is only through the process of creating photographs that he connects with the people of Minamata, in their common goal of seeking justice.

These moments of connection and the power of photography to tell a story come through in “Minamata,” though there are also instances where the cinematic storytelling gets a little heavy. As Smith sings a rough version of Bob Dylan’s “Forever Young” while rocking the sick Tomoko (Muneaki Kitsukawa) – the young daughter of his foster family – the real song falls on the soundtrack, a moment of over-emphasis. Another moment, where Smith reflects on the rejection of a bribe from a Chisso executive, is complicated by unnecessarily nonlinear narration and an aggressive score by composer Ryuichi Sakamoto.

Cinematographer Benoît Delhomme (“At Eternity’s Gate”) creates a naturalistic look with practical lighting and a fluid camera, making the film darkly beautiful, but Levitas also incorporates archival and recreated footage from the protests at Chisso , as well as capturing the photographic process with slow, almost completely still black-and-white footage. Levitas has a lot of ideas about how to express that story in a cinematic way, and he throws a lot of it on screen, so much that he’s starting to feel a little too busy; as with Smith’s austere imagery, less could have been more powerful.

As a film, “Minamata” is more than just a biopic, reflecting the significant social impact of photography, though – like a slideshow of images of pollution disasters, oil spills, poisoning of waste toxic and more are shown in the credits – one has to wonder what real change has been made. Smith and his fellow photojournalists put themselves in harm’s way to help us see the horrors around us, exposing evil to light and freezing its effects in time. But is it enough? True justice only comes when knowledge meets action, when rubber meets road.

“Minamata” opens Friday in US theaters.