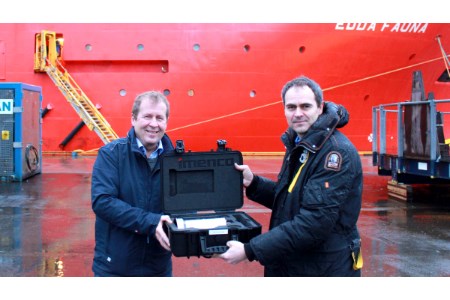 Imenco signs a major contract for the delivery of underwater cameras

Imenco and DeepOcean are both based in Haugalandet, Norway, and are major national and international contributors in their markets. The contract includes the delivery of 96 underwater cameras, which DeepOcean will mount on its entire fleet of remotely operated underwater vehicles (ROVs) over the next three years.

“The cameras are developed by Imenco and can deliver high quality IP video with low delay. We have worked closely with DeepOcean for a long time and we are very happy to have won this big and valuable contract,” says Inge Ivesdal, Area Sales Manager.

Erik M. Hauge, Director of Operations for the European region of DeepOceans, says that it is very positive to be able to sign this contract with a local company such as Imenco.

“It helps to strengthen our local region, Haugalandet, and its strong position as an underwater region. Over a period of three years, we will replace all of our underwater cameras on ROVs with a future-oriented quality product, which will strengthen our competitiveness,” says Hauge.

The production and sale of advanced underwater cameras and other underwater electronics has become an important part of Imenco’s portfolio, and the company is now a world leader in this market. Demand is particularly high in the United States and the United Kingdom, in addition to Norway. In total, this part of the company has a turnover of more than 12 million US dollars, and about 80 of the company’s more than 300 employees are engaged in the development, production and sale of technology of camera from bases in Haugesund (Norway), Aberdeen/Wick (Scotland) and Lafayette (LA, USA).

“We are continuously working on innovation with our customers. Now we are finally getting recognition for many years of developing tomorrow’s camera technology where we have a complete portfolio of IP-based cameras and lights for any ROV/AUV. We look forward to what’s next,” says Imenco CEO Rune Bringedal.

The cameras that will be delivered to DeepOcean are the SubVIS Orca HD IP Zoom camera, a high-end camera used as the main camera on ROVs. The camera has an integrated computer developed by Imenco for the transfer of high quality and low delay videos. Many different settings can be configured by the user to suit other operator equipment and operating conditions.

“Imenco has been in the underwater camera industry since 1999, when we acquired the workshop facilities from Stolt Comex in Haugesund. They had developed an underwater camera which was included in the deal and that was the start of the development of the Norwegian camera for Imenco. Since then we have expanded the range of this camera to now 30-40 different models. This also includes the cameras we acquired when we bought the camera division of Kongsberg Subsea in Aberdeen,” says Ivesdal.

“Cameras and electronics are one of Imenco’s largest and most important areas of expertise,” says founder and owner Geir Egil Østebøvik.

“As well as developing cameras for underwater use, we have also developed a significant portfolio of camera systems for surface use, military purposes and for ordinary conventional navigation, CCTV (closed circuit television). In recent years, we have also gained good market shares in fish farming and aquaculture, so the aquaculture industry is an important area of ​​interest for us,” says Østebøvik.

Read the article online at: https://www.worldpipelines.com/contracts-and-tenders/21012022/imenco-signs-large-contract-for-delivery-of-subsea-cameras/