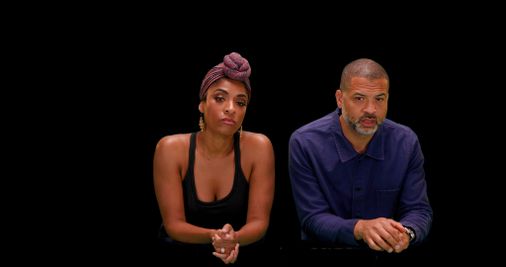 The Morans discussed how that will manifest on stage during an hour-long Zoom session last week that itself exemplified their collaborative back-and-forth. Alicia first recorded herself from the couple’s living room in Harlem, sitting at her computer. Jason joins them a few minutes later, driving his car. He would spend most of the interview returning home from an art installation he created for the Luhring Augustine Gallery in Brooklyn.

Get the Big Task

Your guide to staying entertained, from live shows and outdoor entertainment to what’s new in museums, movies, TV, books, restaurants and more.

“There are times when their sound is there,” Jason replies when asked if their twin teenage sons would be part of the performance, referring to sound clips recorded when they were little.

“Alicia, you could correct me, but part of what we’ve never shied away from is a biographical approach to our musical creation. When you study music at the conservatory, you’re rarely asked to take the history course on your own music history. You take music history from everything else.

“Part of ‘Family Ball’ is about this coming back to each other, rather than going to the big world of the big idea: the Great Migration and the work songs and the lieder and the history of jazz piano and all of that stuff that’s magnified, when really what’s magnified from our point of view is how we relate to each other.

“It’s really a listening session,” adds Alicia. “Like a radio show that’s happening: you can close your eyes and listen to the whole show. You’d hear songs. These songs are from us. These songs occasionally feature key collaborators that we’ve had over time. You can hear two minutes of Brandon Ross, you can hear two minutes of Thomas Flippin on my side – those are two guitarists that I relied on a lot of my musical sense. You can hear six minutes of [Jason’s longtime trio] the Bandwagon, in a live recording we did.

“‘Family Ball’ also distorts time,” adds Jason. “So even though I’m saying that part where we’re not looking at the story, we’re using the way the story interrupts – interrupts – time and marks it so that we make a timeline of how we met, our marriage. . . “

“. . . Make time,” Alicia cuts. “Jason made a [spoken] typo in what he said which was actually the dumbest part. We have “brutal” weather. It’s what he said is true. Then he set it to “interrupt”.

“Not ‘sharp’ as a description,” Alicia clarifies. “We ‘steep’ as a verb. It’s genius.

Soon after, they find themselves talking to each other until Jason insists that his important point be heard.

“What you need to know about us is that Alicia is Leo and I’m Aquarius. It’s fire and air, and each needs the other. I can listen to Alicia forever, because that I am the air of his fire: I can breathe on it and drive him mad. Or I can suck the air and make fire . . . ”

He takes his hands off the steering wheel and brings them together momentarily to suggest firebending.

The conversation turns to what inspired them to examine themselves and their own work in the new project.

“Part of it comes from a photo I took of Alicia in Maine, maybe five years ago,” Jason explains. “It’s a photo of her in that window in that kitchen of that house. I kept the camera on the tripod and then I set it on the timer. And then we took this portrait, which is probably the image I should send you, because that’s the basis that this piece started from. Isn’t it, Alicia?

“I would say Jason’s habit of photographing us in black and white is where the visual proof exists that it would work if we did that,” she replies. “There’s a photo of us where I’m pissed off, Jason is confused. It’s after dark, we’re both very tired. But Jason has this piece of technology – this camera he just got – on this tripod, and he wants to test it. A crazy woman is as good at photographing as any other woman. . . ”

“And then he said, ‘Stand there, the light is awesome’ – and it was that ugly fluorescent light, above me like that.” She grabs the Zoom light for her computer and holds it above her head to illustrate. “And I do the dishes watching him. And then he’s like, ‘Look over there.’ The tripod is there, and we’re just kind of watching. And that’s a great picture of who we really are.

So awesome that they recreated this black and white photo in color earlier this year with multimedia artist and filmmaker Katherine Freer for the video component of the ICA show.

Alicia fetches another photo from across the room, a black and white of herself in an elegant black dress, and shows it for inspection.

“Then Jason took this picture of me. He has this on his computer. It’s like a million pictures of me in the middle of something very stressful. It’s backstage before a gig in Scandinavia. And then he there’s a picture of me walking down the stairs and I’m like, ‘Idiot, what are you doing?’ »

“That’s the most amazing picture,” Jason cuts in, laughing again. “Maybe I’m trying to document a moment of tension. I think Alicia is right: I didn’t know that I was using an instrument to capture the moment when the life of a couple is the most intense. For me, the value of all that is good is that there has to be this tension. And he must flirt with the possibility of disaster.

A couple since college, married in 2003, the Morans began flirting with disaster on multimedia projects – Alicia injecting the theatrical impulses derived from her work in opera and theater into works commissioned by her pianist husband from jazz – since Alicia joined Jason and the Bandwagon for “Milestone” at the Walker Art Center in 2005. Two years later, she helped him prepare “In My Mind: Monk at Town Hall, 1959” for the San Francisco Jazz Festival.

“Literally, while Alicia was in the hospital holding the twins, because they were about to be born too soon at 24 weeks, she explained every song to me,” Jason recalled. “We talked about the videos and talked about the narrative. As soon as we finished, got to the end and said, “OK, here’s what the form will be,” her water broke. »

Now comes “Family Ball,” which the Morans can take to other locations after its ICA run.

“It’s the only one so far and we’ll see,” Jason said. “We’re really doing this for each other and for Boston right now.”

Alicia begins to elaborate, but Jason has arrived home and is parked downstairs waiting. They must be somewhere else.

Bill Bettler can be reached at [email protected].