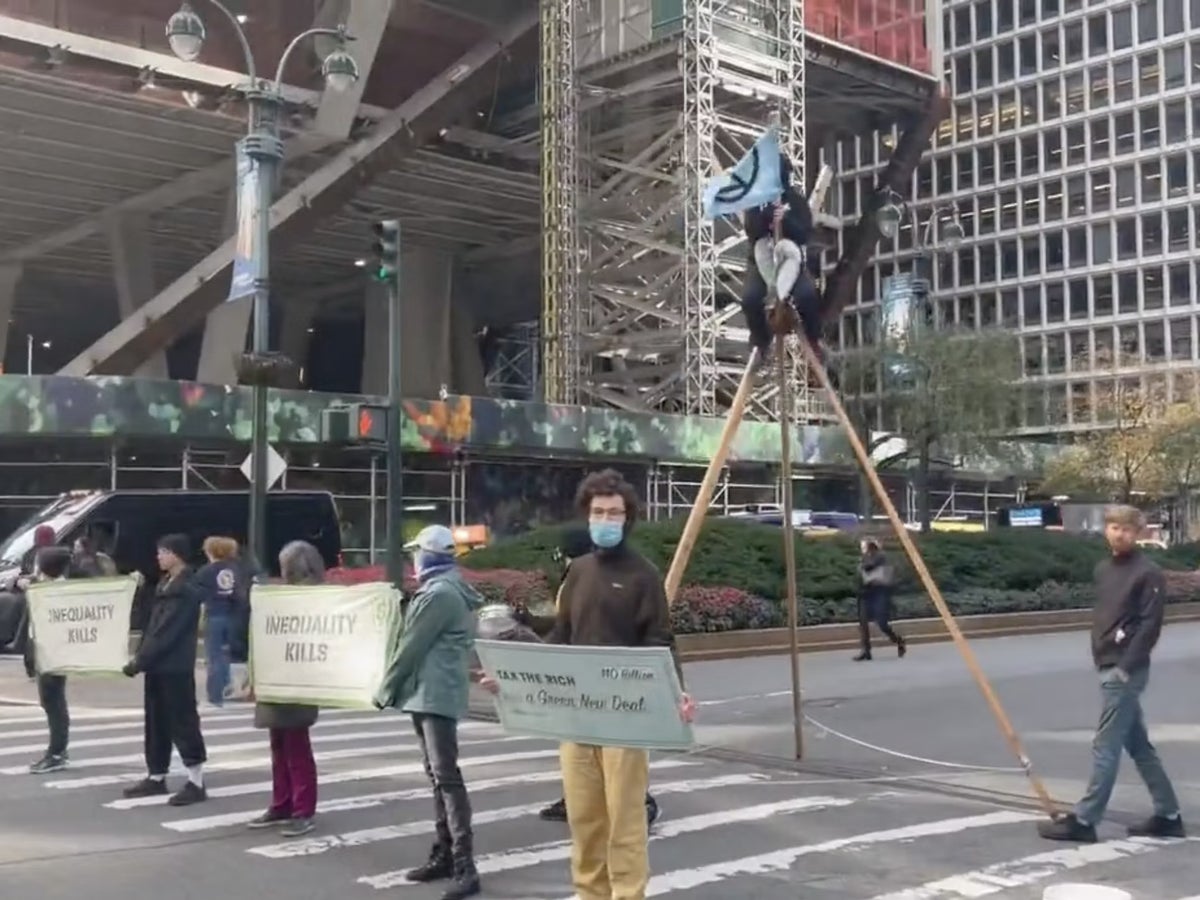 Protesters closed Park Avenue again on Friday as they continue a week of protests over the climate crisis.

Activists could be seen on giant tripods blocking all street lanes near the headquarters of JPMorgan Chase, one of the world’s largest banks.

The protests criticize the company’s funding of fossil fuels.

The shutdown is the fifth consecutive day of climate protests in New York, led by activist groups like New York Communities for Change (NYCC) and local branches of the Sunrise Movement and Extinction Rebellion.

Protesters blocking traffic held banners that read things like “How dare you plunder the Earth” and “Your greed = climate chaos”.

By early afternoon, the protest had dispersed and 16 people had been arrested, a New York Police Department representative said. The Independent.

Many actions this week have targeted the financial sector. On Wednesday, protesters occupied the New York headquarters of BlackRock, one of the world’s largest investment firms, to criticize their involvement in fossil fuels.

Thursday’s protests targeted the home of Stephen Schwarzman, the CEO of Blackstone, another investment firm that has invested in fossil fuels.

A 2021 report from nonprofits such as the Rainforest Action Network and the Sierra Club found that JPMorgan Chase financed more than $316 billion in fossil fuels between 2016 and 2020, the most of any bank in the report. .

The Independent has contacted a JPMorgan Chase representative for comment.

“We’re taking the fight where the wealthy live and work, so they can see it and feel it,” said NYCC climate activist Alice Hu. The Independent in a statement Tuesday.

“As the 1% and corporate greed destroy our planet and impoverish our people, we need them to pay to fix what they broke.”

On Monday, another protest led by activists from these groups interrupted a recording of View with Senator Ted Cruz to protest the Texas Republican’s appearance and criticize ABC’s coverage of the climate crisis.

On Saturday, these groups and other nonprofits plan to walk down Park Avenue in recognition of the 10th anniversary of Hurricane Sandy’s landfall. The march will end “in a moment of silence and die-in to call out the filthy rich as they perpetuate climate destruction and demand that [New York Governor Kathy] Hochul enacts a tax on the rich for a Green New Deal. “