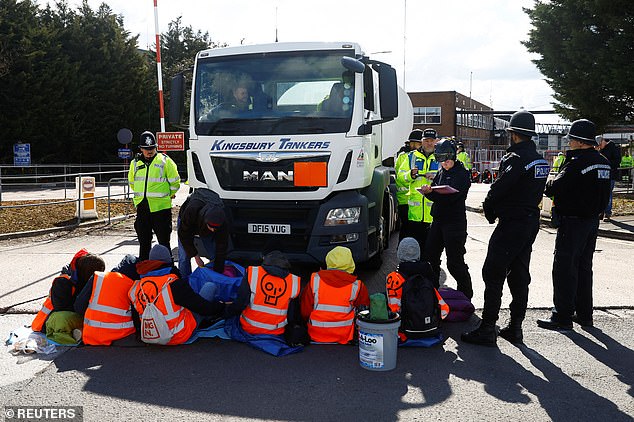 At least 34 climate change protesters have been arrested for blocking oil terminals across the country – as activist groups warned they would become ‘more disruptive than ever’ from next week.

Just Stop Oil and Extinction Rebellion protesters clogged 10 fuel sites across the Midlands and south of England in the early hours of yesterday morning, to oppose ‘expanding oil and gas production UK”.

Protesters were glued to roads, suspended from bamboo tripods and locked to oil drums and each other from around 4 a.m.

ExxonMobil UK, one of the country’s largest private underground pipeline distribution networks, said it closed three of its terminals as a result, and police from at least five forces were deployed to tackle the protests.

The Met arrested 14 activists who broke into an establishment on Bedfont Road in Staines, Surrey, while Essex Police detained 13 protesters at various sites, and West Midlands Police arrested six people at a terminal in Tyburn, Birmingham.

Protesters were glued to roads, suspended from bamboo tripods and locked to oil drums and each other from around 4 a.m. There is no suggestion that anyone was among those arrested

ExxonMobil UK, one of the country’s largest private underground pipeline distribution networks, said it closed three of its terminals as a result, and police from at least five forces were deployed to tackle the protests.

Police said arrests were made for offenses including aggravated trespassing, criminal damage and obstructing the highway.

All those arrested by the Met remain in custody at a police station in west London, police said on Friday evening.

Their officers were called to the Bedfont Road site around 4.15am, where protesters had blocked the entrance.

It comes as Extinction Rebellion leaders said they would launch a new wave of protests from next Saturday – including ‘mass turnout’ on the streets of London which will be ‘more disruptive than ever’.

XR said it predicted the final “rebellions” from April 9 which will start in Hyde Park and then spread across the capital – saying they will be “impossible to ignore”.

Demonstrations are also planned in Birmingham and Southampton and ‘non-violent direct action training’ will be provided.

XR spokesperson Andrew Smith said: “From Saturday April 9 we will meet daily at 10am in Hyde Park. We’ll be easy to find, we’ll be easy to reach, we’ll be more disruptive than ever, and we’ll be impossible to ignore.

Police said arrests were made for offenses including aggravated trespassing, criminal damage and obstructing the highway. Pictured: The scene outside an Esso fuel terminal today

The protests come on a day households across Britain see the biggest rise in the cost of energy in living memory, as average bills over the price cap rise by 54%, or almost 700 £, to reach £1,971 per year (far right, in chart above)

“In the tradition of nonviolent civil disobedience, we will disrupt business as usual until government and big business change. We need everyone to join us.

“The Met has closely coordinated its response with other police forces, sharing information with the top priority of resolving each incident as quickly and safely as possible.

“Such actions by militants affect critical national infrastructure and distract many officers from responding to emergencies in their communities.

Extinction Rebellion protesters paralyzed London for several days in 2019 as protesters set up camps and roadblocks on major highways, including Waterloo Bridge (pictured)

XR spokesman Andrew Smith said unlike the “pink boats” seen at Oxford Circus in 2019, the protests this time would simply be based on “people power”.

“Being able to protest peacefully in a democracy is important, but it’s also important that there are consequences for those who break the law.

“The Met’s arrests today, along with arrests made by other police forces, have minimized disruption across the country.”

Just Stop Oil said in a statement: “The Just Stop Oil Coalition demands an end to the Government’s genocidal policy of increasing oil and gas production in the UK and calls on all those outraged by the prospect of climate collapse and who suffer the cost of -living through the crisis to stay with us.

“He funds war and kills people in the Global South, while destroying the future of young people around the world.”