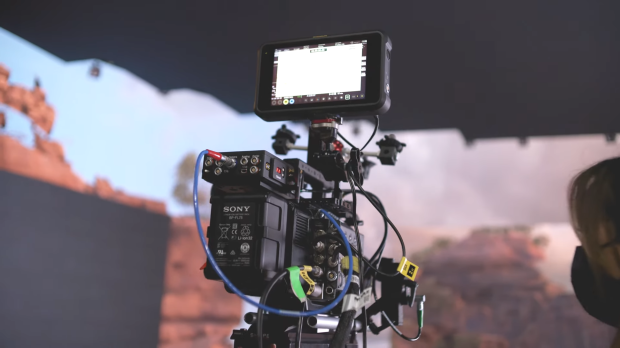 The metaverse is still many years away, but Epic Games and Sony are laying the groundwork for it right now. Sony recently supplied Epic Games Lab with its new high-end VENICE camera and B-Series Crystal LED panel to power the game maker’s virtual production initiatives. Epic’s Unreal engine is used for a number of productions, including video games and filmmaking, the latter largely in the process of moving to virtualized production that limits set creation and specific interactions during the global pandemic.

â€œWhat’s been interesting to see is how believable the images you see on the new panels are, because of the resolution, because of the color accuracy. When we see them through the VENICE camera, the fact that these two things match up makes you think you’re looking at a realm image as opposed to a total illusion … which is basically what virtual production is, “said Kim Liberi, CTO of Epic Games.

The new B-Series Crystal LED displays have been specifically designed for VP environments to fuel the new era of movie making and content creation, Sony says, but the sky is the limit. They can also be used for games and possibly a new wave of interactive experiences.

Sony’s cameras have exciting potential outside of cinema, however, and Epic Games are planning to use these new VENICE cameras to facilitate their viewing of the metaverse.

Even Sony Pictures is excited about the metaverse.

â€œI am excited about the next level of [synergy between Sony and Sony Pictures], what is after virtual production because I think when we talk about the metaverse, virtual reality and a lot of other products that are starting to pop up … a lot of what we do in virtual production is completely applicable to this, “ said Bill Baggelaar, executive vice president and technical director of Sony Pictures.

Epic CTO Kim Liberi also delivers improvised ambitions on the Metaverse and how Sony’s new tech could help bring it to life:

Game developers are also excited about the initiative: