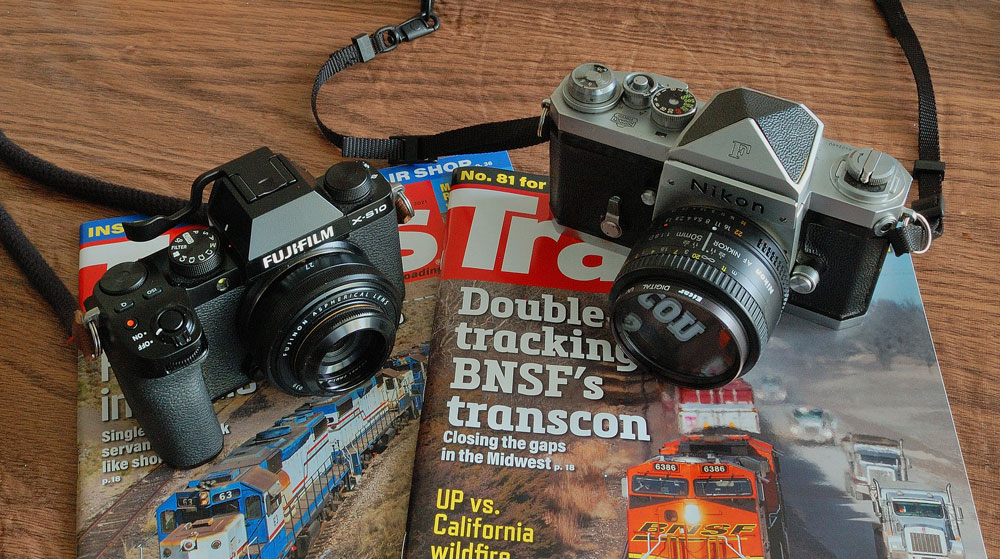 Digital or analog railway photography? Before the advent of digital technology, the photographic standard of our hobby was transparency, or slide film. While several manufacturers guaranteed the user the desired color temperature and punch, the preferred emulsions were the various flavors of Kodachrome and Fujichrome.

The former was prized for its “pop”, especially on sunny days and its interpretation of reds, yellows and browns. The latter arrived in force in the late 1990s-early 2000s and is appreciated for its saturation, especially greens and blues.

In its infancy over a quarter of a century ago, affordable digital for the mainstream was not seriously considered a viable competitor to cinema. Tyros using three and four megapixel cameras could not produce the overall quality and consistency of a roll of Kodachrome, or any other emulsion for that matter. It was seen as smart technology for instant gratification, but nothing to drain your movie senders. “Chrome” was still king.

But for the champion, the battle was already lost.

It would take about a decade to get competitive technology into the hands of shooters in the field that would eventually meet and exceed what could be gotten from film. Today, many camera manufacturers even allow the user to dial in the desired film simulation to mimic the days of yore.

If it’s not on the camera, there are various plug-ins and filters built into photo editing software that can do it, even on your smartphone.

But for some, nothing will replace film, and while many shoot digital for its ease of use, they also pack a camera loaded with Kodak or Fuji transparency film. It’s not vanity or being stuck in the past; for many, there are real reasons to keep recording footage one roll of celluloid at a time.

“I turned the page on digital cameras in 2004. When shooting in color, we now have a much wider tonal range, which has improved as technology improves. With digital, I have the color of Kodachrome with the tonal range of Tri-X.

For Hal Miller, Editor of Kalmbach Media’s Classic Toy Trainsnothing beats the ease and speed of working in digital, but he says there have been some unexpected trade-offs.

“I was a better photographer in the movie days,” he says. “I can say without reservation that digital has made me lazy.” He says he was much more careful and thoughtful about his photos when using slide films, in his case Fujichrome and later Velvia, mainly because he was paying for the processing.

Today, he shoots with digital equipment for its ease of use and time saving, especially in the face of magazine deadlines. “I instantly get the assurance that I have the shot, but I don’t have the same sense of accomplishment when I was waiting for the film to be processed. Did I get it or did I miss it? »

Brian Schmidt, editor of Classic trainssays digital photography gives him more opportunities to get it right the first time.

“I must emphasize that it is the photographer who has the vision of the photo. The camera is just the tool you use to create that vision. Is the photographer better than a watercolourist? No, because they both create an image. They are simply using two different tools to achieve the same end goal.

Schmidt says acquiring his first digital camera around 2010 forced him to see photography a little differently because he used a cropped sensor but with his old film lenses. The lens may have been marked 50mm, but on his equipment it meant 75mm.

“If you’re filming for your project, what you see on the slide is what you get. With digital, it’s easy to manipulate the final image however you want.

Plus, he says the slides add a layer of complexity to his work.

“There was a generation of photographers who shot almost exclusively for projection, and they would dial in all the way to the edges of the frame and a bit darker to get more saturation.

It made for great slideshows, but now that we have to process those photos for publication, it can be more difficult,” says Schmidt.

There are still some among us, however, who default to filming whenever possible.

John Wade, a photographer from Long Beach, California, is bucking the digital trend and swearing by his Fuji Velvia now that Kodachrome is a thing of the past. He shoots digital when he feels it’s the right choice, but if he has a choice, he goes for film whenever he can.

“I love the feel and the beautiful bright colors, the cleanliness of a well-exposed transparency that shows off the dramatic countryside in the southwest where I live,” he says. “I have nothing against digital; it’s just not the medium I want to use. For me, nothing beats the solidity of hearing my Nikon F3 capture the scene the way I want it.

There are virtues and disadvantages to both media. Ultimately, however, everyone who uses them ends up in the same place.

“It’s up to the photographer to decide which tool – in this case, film or digital – they want to use to achieve a specific effect,” says Hal Miller. “Right now digital is predominant, but now there is and always will be room for film as well.”