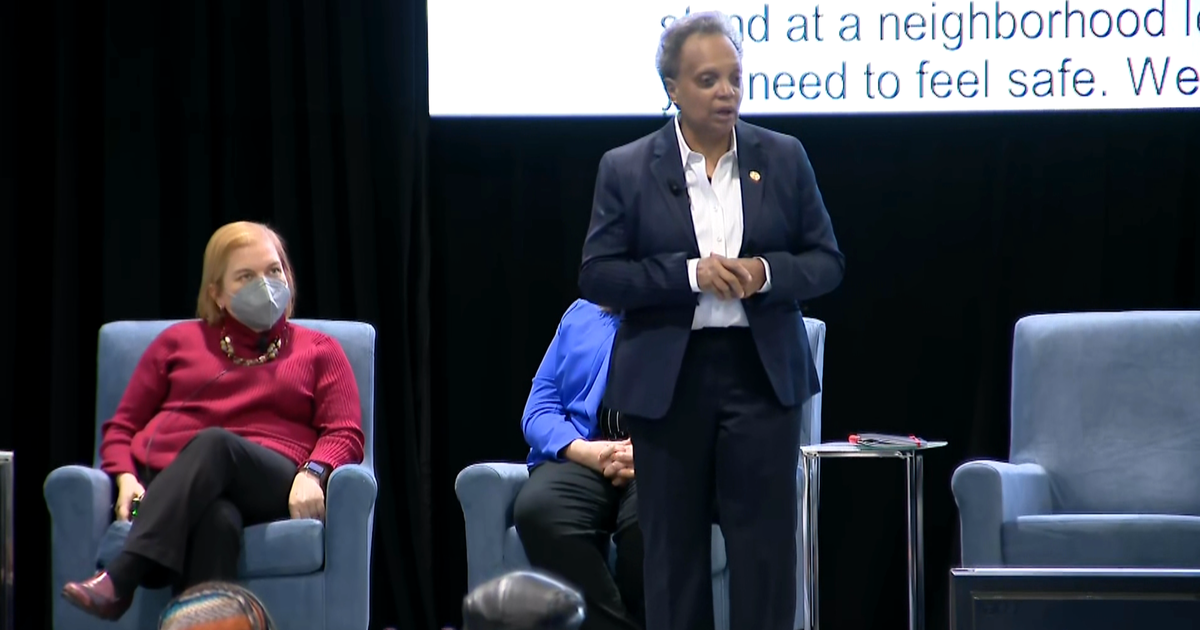 Chicago in the crosshairs: Residents clash with Mayor Lightfoot and other city leaders over security and violence at Southwest Side town hall

CHICAGO (CBS) – Safety and violence were the focus of a town hall meeting on the southwest side of town on Monday, the same day Mayor Lori Lightfoot announced a program to help people pay for doorbell cameras and lights of movement.

As CBS 2 political investigator Dana Kozlov reported, it’s all part of a plan to both deter and fight crime. The town halls are a tangible part of what Mayor Lori Lightfoot says is a multi-pronged approach to tackling crime.

The town hall on the southwest side of Richard J. Daley College, 7500 S. Pulaski Rd., was the fifth of six town halls in the city — aimed at hearing the specific concerns of those who live nearby. Some went the extra mile to attend Monday night town hall – with demands.

First at City Hall, there were table discussions, with Mayor Lightfoot and the Superintendent of Police. David Brown talks one-on-one with people. Many of those present live near Midway International Airport.

“We know that 2021 has not been a year that any of us can be proud of when it comes to public safety, and the superintendent and I, and others here, are truly recommitted to being more accountable,” said Mayor Lightfoot.

The mayor said that so far some violent crime is down year over year. When she made this statement, the room was far from full – there was a whole table that was empty.

“I’ve also heard from a number of you, ‘I wish more people came out,’ and I agree,” Mayor Lightfoot said. “We’ve seen much larger numbers in other parts of the city.”

Some in the room were from another part of town – the Garfield Park area on the city’s often turbulent West Side.

“Whatever the money for the security plan, Chicago’s West Side could be first,” East Garfield Park resident Tiffany Smith said, “because we’ve been neglected — totally neglected — for more than 50 years.”

Residents like Smith and Etta Johnson said they made the trip with specific requests for the city to spend $10 million more on lighting, police cameras, placement programs and recovery programs for the Garfield area. Park.

“We need the same respect as the other parties,” Johnson said. “We deserve it.”

They also want home cameras, which aligns with the rebate program that was just announced. The program would give residents cameras in partnership with the city, which the city could then use to help solve crimes.

Chicago Community Safety Chief Coordinator Tamara Mahal said there will be a program to cover 100% of the cost of safety systems.

“Yes, and specifically for Garfield Park – knowing that they are one of our most violent communities,” Mahal said.

The sixth and final public security meeting is taking place on Tuesday evening on the north side of the city.

Dana Kozlov is an Emmy Award-winning political investigative reporter for CBS2 Chicago. Before joining the station in 2003, she worked at WGN, CNN Chicago, and WEEK-TV in Peoria, where she began her journalism career in 1992.

Cost of living crisis: Areas of Greater Manchester most at risk from spiraling bills