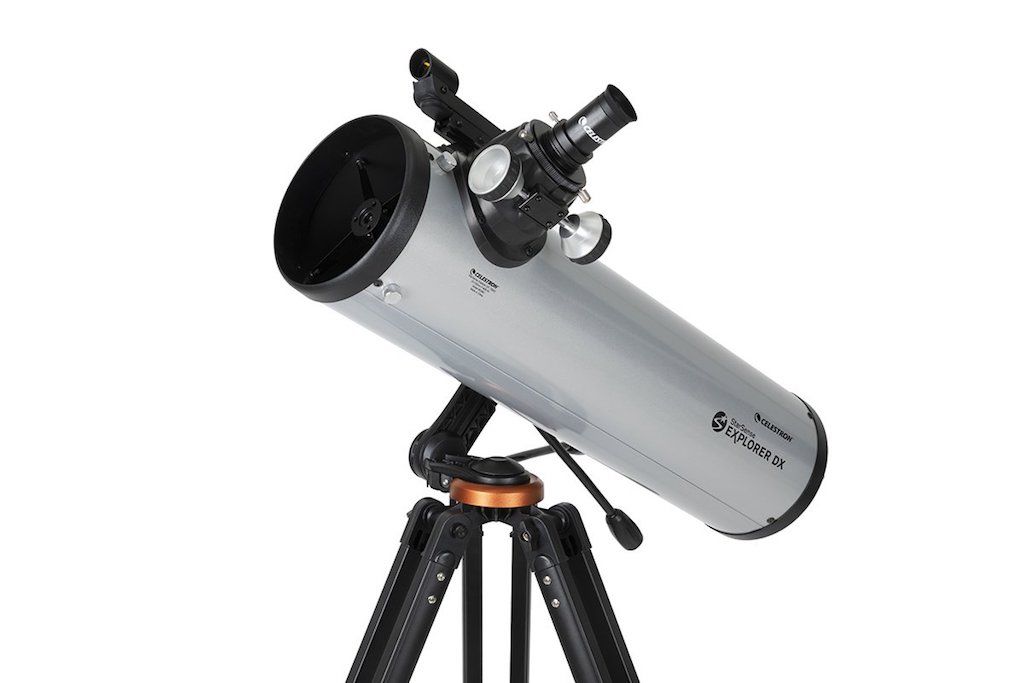 With a range of apertures, the StarSense Explorer range offers telescopes with a selection of affordable prices – with eyepieces, star diagonals, mounts, tripods, accessory trays and a smartphone docking station included. in the budget.

The Celestron StarSense Explorer DX 130AZ is a 130mm (5.1 inch) Newtonian reflector. Given its focal ratio of F / 5 and focal length of 650mm, it is a fast telescope suitable for low-power observation of celestial objects. The telescope tube itself attaches to an alt-azimuth mount with dual-axis idle controls.

The optical tube and the mount are of good quality. A particularly interesting point is the lightness and the portability of this system, allowing the astronomer to move easily with the whole of the assembly without problem.

The telescope itself is moved manually, either by pushing the telescope tube with your hand or by using the slow motion control knobs for fine adjustments. The construction of the instrument is simple and straightforward, especially by following the instructions provided. Overall, the process took about 15 minutes.

The next step in the process is to download the StarSense app to your phone, which is suitable for both iPhone and Android users. It should be noted that the telescope can be used without a phone or even an app, but as you will see later in this review, this is where the telescope really excels for the novice observer.

As the Celestron StarSense Explorer DX 130AZ is a Newtonian telescope, it is very important to collimate the mirrors; this is quite easy to do by following the included instructions. We can’t stress how important this is if you really want to get the most out of the DX 130AZ – it will make a significant difference to your telescope enjoyment.

The telescope comes with two eyepieces – one 25mm and one 10mm, offering powers of 26x and 65x, which are suitable for low power large field observation. If you want to use higher powers, we recommend purchasing a good quality Barlow lens. To see a fair amount of detail on the planets, you’ll need magnifications of at least 150x, well above what the included eyepieces offer.

Once the telescope is assembled, you are ready to download the StarSense app. The vast majority of popular phones support the app to work, so you are unlikely to encounter a compatibility issue. For the purpose of this review, we used a Samsung Galaxy S10 + phone for the operation of the app – no issues were encountered.

The app itself is very easy to use with an attractive graphical interface and easy to understand controls. Once downloaded, you can then plug your phone into the telescope docking station and adjust so that your phone’s camera correctly points to the mirror on the docking station. There are many different objects included in the app, such as planets, stars, nebulae and galaxies, enough to keep astronomers busy for a very long time!

Once installed outdoors, it’s time to align the telescope with the night sky. The alignment process is quite smart and straightforward. The application plate resolves the image it sees from your phone’s camera to identify where the telescope is pointed and works quickly and accurately.

The fact that such technology is now available in beginner telescopes is impressive and completely takes away the countless hours one would otherwise spend jumping from stars to different objects (a process that takes a lot more time and patience!)

Once installed and aligned, you are ready to begin viewing. This is where the Celestron Explorer DX 130AZ really impresses. Our first target for the telescope was Mars, which shone brightly in the southeast.

The StarSense setup asks you to move in a specific direction with the telescope and when you push the tube, getting closer to the object, the app slowly zooms in – this is your signal to start using the slow motion controls. . Once centered in the bullseye graphic, you are ready to see the target object through the eyepiece. We were amazed to see Mars dazzling near the center of the field of view during our observations.

We moved to a variety of different objects, from galaxies to nebulae, all of which were located smoothly with the StarSense Explorer DX 130AZ and still in the low power field of view.

The Andromeda Galaxy (Messier 31), the Triangle Galaxy (Messier 33), the Orion Nebula (Messier 42), the Bode Galaxy (Messier 81) and the Cigar Galaxy (Messier 82) have all been observed. through an incredibly sharp and contrasting view. Then we returned to return to Mars and pushed the optics to higher powers using a Barlow lens (not included). At around 150x, Mars looked crisp with the familiar albedo markings visible. Even the tiny southern polar cap of the planet could be seen. During this time, the moon showed impressive detail with a myriad of craters and mountains.

Stellar tests of the telescope at higher powers revealed well-corrected optics and the stars focused well in tiny airy discs, as you would expect from a good quality telescope. It’s a shame that much more powerful or Barlow eyepieces aren’t included as you need substantial magnification to see planetary detail: the eyepieces provided don’t offer this.

We decided to try and operate the telescope without our phone and the StarSense app, which we found to be hassle-free. The telescope includes a small red dot sight, which works well and is able to select some of the fainter stars for star hopping.

Note that it is preferable to align the viewfinder during the day and on land objects to avoid tampering in the dark. Even as a simple manual telescope, the Explorer DX 130AZ performs well. Of course, then you have to locate objects “the hard way”, but the telescope’s movement motions are smooth and the slow-motion controls work fairly easily to center and hold objects in the field of view.

Although this reflector is a thin telescope for visual observation, it is not really suitable for astrophotography. Since the mount is not driven, long exposure work is not possible. You can of course take simple afocal images while holding a phone against the eyepiece, and the moon is an excellent target for this purpose.

Should you buy the Celestron StarSense DX 130AZ?

Overall, the Celestron StarSense Explorer DX 130AZ is a great telescope for the beginner skywatcher. Its price is affordable: you get a high performance system for your money. It’s also extremely user-friendly, we found that a youngster at the age of eight could start to get used to it.

No telescope is perfect, and this one is no exception. We would have liked to see a more powerful eyepiece or Barlow lens included in the package to allow more powerful views of the planets (essential if you want to see details on them).

Another point to note is that the telescope must be collimated to function properly: this is not the easiest task for a beginner, especially with a Newtonian. That said, the small size of this instrument makes the process easier than on larger telescopes where you are constantly moving between the collimating screws and an eyepiece.

The StarSense Explorer DX 130AZ is a great choice for a first-time telescope or for those just starting out. Its great user-friendliness and its powerful StarSense application make this telescope an incredibly powerful tool that will provide many hours of viewing pleasure.

If this product is not for you

However, if you’re looking for something that offers the same viewing force with a 130mm aperture – and with a range of accessories – then the Celestron Astro Fi 130 is a good choice, offering a bit more of an edge in terms of smartphone astrophotography and a more sophisticated way to browse the night sky.