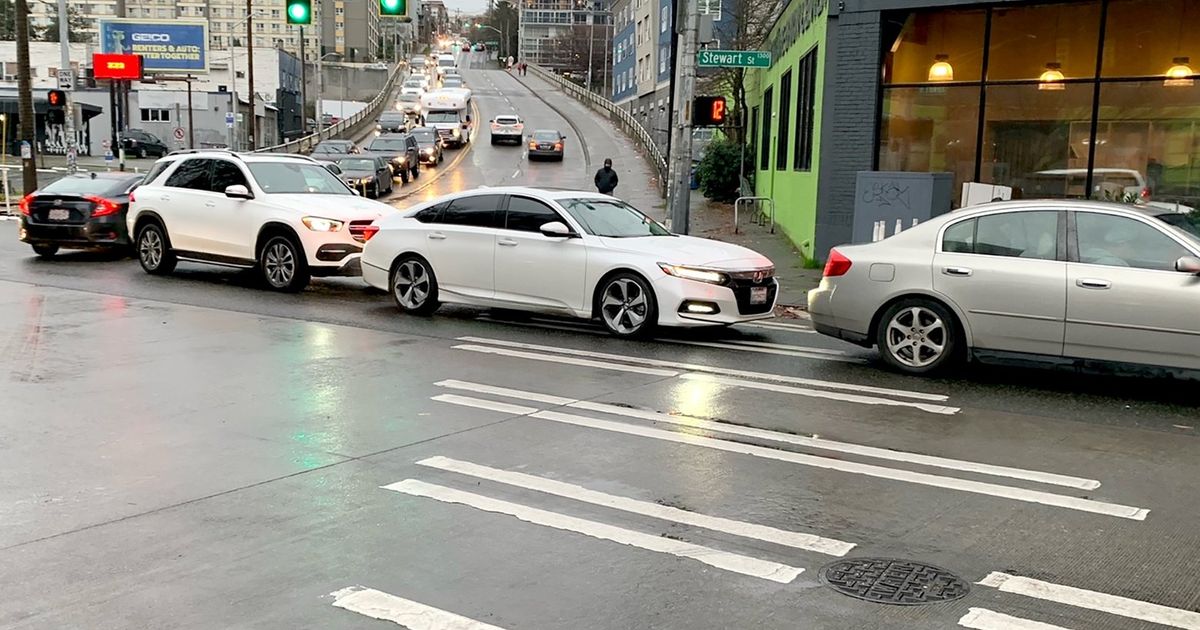 Seattle pedestrians are known to dutifully wait for the traffic light before crossing the street. A pilot program starting next year wants to make sure drivers reciprocate and keep the crosswalk clear or face a fine.

This could be a positive step for a city that wants to move away from an automotive-centric culture.

A bill approved by the legislature in 2020 allows Seattle to install traffic cameras in up to 20 locations, mostly around downtown, to make sure drivers don’t ‘block the box’ – that is, not obstruct intersections or crosswalks.

Eight locations will be operational in January, with four groups of cameras monitoring obstructions in transit lanes, three looking for those blocking the box and one, on Fifth Avenue in Olive Way, monitoring both.

All locations will have clear signs and markings on the roadway, with white lines delineating the “box” and red paint indicating bus-only lanes, according to the Seattle Department of Transportation. Drivers will be mailed a warning for a first offense and a $ 75 citation for repeat offenses.

Although some of us behave differently, driving a motor vehicle does not give you any special status. You can’t break the rules because you have to get to where you are going. The route of a driver is just as important as that of a pedestrian or a public transport user.

When a vehicle blocks a crosswalk – through carelessness or turning right at a red light – pedestrians are forced to bypass, sometimes in traffic, to cross the street. For someone in a wheelchair or blind people, the danger is magnified. Over 50% of pedestrian deaths in wheelchairs get to intersections, according to a study from Georgetown University.

When a car rushing to beat the fire gets caught at an intersection or blocks a transit lane, it can also delay buses, hamper first responders and worsen traffic jams.

In a puzzling statement, a trio of Democratic lawmakers from a suburban and rural western Washington state say they oppose the program, apparently calling their constituents unhappy who will neglect the rules of the road.

Senator Kevin Van De Wege, D-Sequim, worries that people who live outside the city “may not even know such a law exists”, while Representative Mike Chapman, D-Port Angeles, admits that when he drives he looks at the road and traffic not at the signs and that he is probably no different from his constituents in that regard. Senator Lisa Wellman, of D-Mercer Island, also objected because visitors might not be familiar with traffic patterns.

Never mind that the Washington State Department of Licensing Driver’s Guide – the book every driver in the state should study – makes it clear to stop before a crosswalk, give way to pedestrians. and watch out for traffic signs.

These lawmakers are also unaware that their constituents could eventually get out of their cars and want to cross the streets safely.

There is no valid reason to oppose the pilot program, which frees the police and is accompanied by a series of guarantees that address privacy concerns and an appeal process for truck operators who accidentally block the box. All quotes issued must also be reviewed by an officer.

Testifying before the Senate Transport Committee in 2020, Clark Matthews, a member of the rights group Rooted in Rights, put it better: â€œThe only argument I have heard against the enforcement of traffic cameras is that this could work, â€he said.

When the Block the Box program starts, Seattle drivers can make sure it does.