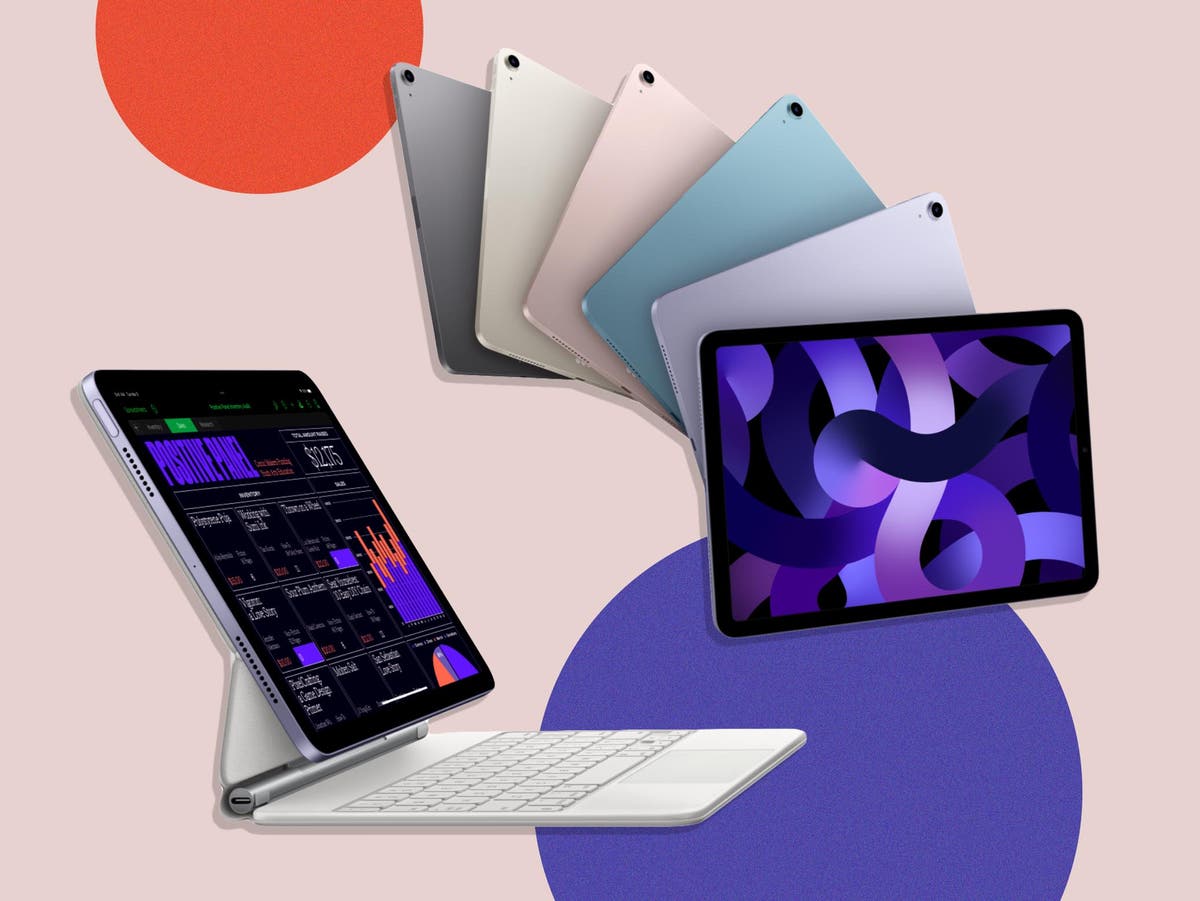 Apple’s iPad lineup now consists of four distinct strands. There’s the iPad (£319, Apple.com), the entry-level, high-value model, to start with. The iPad mini (£479, Apple.com) is the smallest model, unsurprisingly, and has just been redesigned and features a super-fast chip. Top of the line is the iPad pro (£749, Apple.com) which comes in two screen sizes, has multiple cameras and the Apple M1 chip which is powerful enough to run the iMac and MacBook air from Apple, for example.

Finally, there’s the iPad air which, with this new model, reaches its fifth generation (£569, Apple.com).

The Air first arrived as a super-light, super-slim alternative to the entry-level iPad, which it resembled. Then, in September 2020, it was suddenly redesigned to match the pro, with flat edges and an all-screen front.

This time around, that beautiful design is unchanged, but the processor and other internals have been overhauled.

I tested the new iPad air for a week, judging performance, battery life, ease of use, and more. Equally important, I compared this device to others in the iPad lineup to give an idea of ​​which one to buy.

You can currently pre-order the latest iPad air 5th generation until Friday, March 18, when it officially launches.

If you’ve seen the latest iPad air (£499, Currys.com) – the late 2020 model – you’ll know what this one looks like. They look identical, at least, aside from the colors. There are five this time: “space grey”, “starlight”, pink, purple and blue. “Space grey” is a dark grey, “starlight” is silver with a gold shimmer, and the other three are self-explanatory. Blue is the brand new shade that pulls a bit towards teal.

Beyond that, the new iPad air has the same classy design as the old one. Highlights include a matte anodized aluminum finish with slightly contrasting antenna strips around the edges. The Apple logo is the only shiny part of the case – silver but color-matched to the rest of the back. The only other markings on the back are the single camera and three gold dots near the bottom, which are the connection points for accessories like the Smart Keyboard Folio (an effective keyboard cover) and the Magic Keyboard, an expensive cover but absolutely brilliant, stand and backlit keyboard with trackpad in one.

The flat edges are similar to the design of the Apple iPhone 13 series (£719, Amazon.co.uk). One benefit of these is that the second-generation Apple Pencil (£119, Apple.com) – a smart stylus – can magnetically snap into the air to charge.

There’s another key element to the design of iPad air: the power button. When Apple switched to the new design, it removed the Touch ID fingerprint sensor home button from the front and enlarged the screen to 10.9 inches, squeezing the LCD screen all the way to the edge. This is an all-screen machine. But where the most expensive iPad pro has facial recognition to unlock it, there’s no Live Face ID.

Instead, it has integrated the fingerprint sensor into the power button which sits on the top edge. It’s great, it works better than other fingerprint unlock systems I’ve tried. This is because instead of tapping the button to activate it and then tapping again to unlock it, the Apple Touch ID on iPad air unlocks on the first tap and if you let your finger rest it opens the iPad to access the last opened application.

The iPad air has a single rear camera. It’s different than the previous iPad air but remains at 12MP resolution. It works well, although the iPhone or a standalone camera are still preferable photographic choices.

The new iPad air retains its modifications inside. The most important of these is the introduction of the M1 processor. It’s a hugely powerful chip that’s at the heart of the latest iMac (£1,099.97, Amazon.co.uk) and the MacBook air (£999, Apple.com). It appeared in the iPad pro last spring. So putting it in the significantly cheaper iPad air is impressive and suddenly takes the air’s performance to pro levels – which is really really fast and powerful. Last spring’s iPad pro set new performance benchmarks.

Such a fast and capable processor allows applications to run fast and run at pace for longer. It’s as if the processor adds endurance as well as speed. The addition of the M1 processor alone, replacing the already fast A14 Bionic chip of the last model, is enough to make a big difference in the value and performance of the iPad air.

The 11-inch iPad pro has more to offer, of course, but it and the iPad air are now more aligned than ever thanks to the M1. The pro’s screen size is only slightly larger (11 inches instead of 10.9 inches) and both use the same LCD technology. The larger iPad pro model – the 12.9-inch version – has a definite edge in its screen technology, using mini LED backlights to add punch. But it’s a bigger and more expensive option.

There’s another hardware upgrade in this iPad air: the front camera. This has now been upgraded to a 12MP model which, combined with the M1 processing power, means Center Stage is now present.

It’s brilliant video conferencing capability means the smarts of iPad can keep you in the center of the action. The processor’s machine learning zooms in and out of the available image to keep you in dead center, even zooming out automatically when someone else enters the frame. It’s on every other iPad, so it was a shoo-in here, but it’s a welcome addition nonetheless.

So why would you choose the 11-inch iPad pro?

It’s a good question. With the iPad air price starting at £569 (Amazon.co.uk), against the £749 sticker price of the 11-inch iPad pro (Currys.co.uk), the air looks like the perfect balance – Goldilocks’ choice.

After all, the M1 processor common to both is fast enough and powerful enough for all users. The screen has the same resolution in terms of pixel density (264 per inch). There are additional capabilities in the pro display with dynamic refresh rate, for example, but the air display is fantastic. If you want a slightly brighter screen (600 nits), the pro is your iPad, but the Air’s 500 nits are still brilliant. The pro has a faster USB-C connector, although the live one has been upgraded, but not as much.

As mentioned above, the comparison isn’t nearly so straightforward when you pair it with the 12.9-inch iPad pro with its dazzling display, of course.

There are dual rear cameras on both iPad pro sizes, plus a LiDAR scanner that improves photography and augmented reality features, compared to the iPad air’s single camera. But a large, flat slab of aluminum and glass has never been the ideal camera, compared to a user-friendly iPhone or an ergonomically superior DSLR.

The iPad pro has Face ID, but Touch ID is implemented so beautifully here, it might not be such a distinct pro perk. Sure, you can get the pro in larger capacities, up to 2TB of storage, but the max 256GB live storage capacity is big enough. Both are available in wifi and wifi plus 5G variants and although both are the same height and width, the pro is slightly slimmer.

In other words, in many ways the 11-inch iPad pro is better than the iPad air, but the new air is so much improved that for most people the difference might not be worth it.

Sticking with the design of the previous iPad air means it no longer has the wow of the new, but it still looks great. But inside, there’s the super-fast and powerful M1 processor, bringing the performance of this iPad closer to that of the latest iPad pro.

It’s a spectacular iPad on its own, with a gorgeous 10.9-inch screen, useful new features like Center Stage for better video calls and speedy performance.

The great look of iPad air includes adorable new colors. It offers the same versatility and homey feel as previous iPads, has the convenience of second-generation Apple Pencil compatibility and the excellent Magic Keyboard, and offers super-fast and responsive performance. For many people, this new iPad air will be more than powerful enough to make it the ideal choice.

For the latest tablet discounts and other tech deals, try the links below: