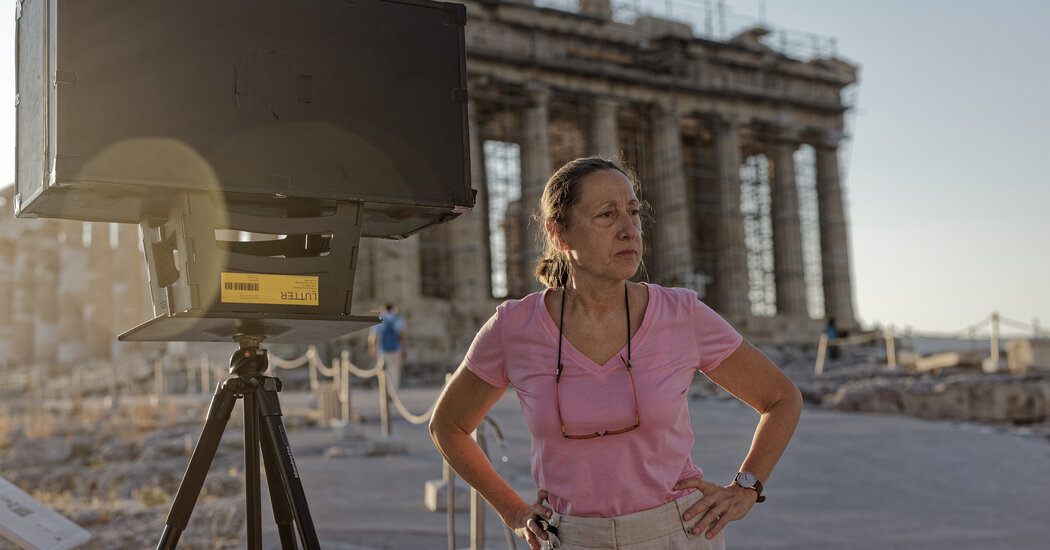 Ancient Greece through the lens of Camera Obscura

Times Insider explains who we are and what we do, and provides behind-the-scenes information on how our journalism comes together.

In early August, when The Times Magazine contacted photographer Vera Lutter to document ancient Athenian ruins, she was in her native Germany mourning her father, who died this summer. At the time, European news had been dominated by reports of forest fires in Greece – a bad omen for the clear skies and the uphill hikes required to shoot to the top of the Acropolis.

And Shannon Simon, a photo editor producing the project for the magazine, said they needed the photos by September.

On Monday, during an interview in her studio about her work that appears in the magazine’s Travels issue, Ms. Lutter had a question to ask about the newspaper.

“What I would love to hear from you,” she said, “do you think they knew what they were getting into?”

The Times couldn’t have predicted everything. There were the physical challenges of lost sleep and skipped meals, a gamble with scarce artistic materials, a succession of punitive treks, and a rush to improvise an unsightly photographic technique, while navigating high winds, of heat and forest fires. Either way, the idea paid off.

â€œThere is great pride in these feats,â€ said Kathy Ryan, the magazine’s director of photography, adding that these obstacles are often â€œthe nuts and bolts that lead to great artâ€.

Ms. Lutter practices the form of labor-intensive photography known as camera obscura. She hangs photosensitive sheets in front of lenses in pitch black spaces (anything from a log cabin to a shipping container). Light penetrates and burns a black and white negative of an image onto the paper, transforming the bright sky into darkness and the shadows cast by daylight into a pale, eerie glow.

His photographs accompany an account of the memories of a classical education. Ms Ryan said she had long wanted to work with Ms Lutter, and this project presented the right opportunity because “it was about taking the oldest form of imaging, the camera obscura, and applying it to this contemporary topic to look back. antiques and Greece.

Planning and executing her process can take months or years for Ms. Lutter. The Times asked him to start and finish a new project within a few weeks.

Yet she has long admired classical architecture – and her father had taken her to see those same sites in Greece when he was young.

â€œIt seemed like a kind of dream come true and completely impossible,â€ she said.

Within days she was on a plane.

Once in Greece, she had to build a dark room in the bathroom of an additional hotel room. Thanks to her years of experience, Ms. Lutter had no trouble transforming the shower into a sink. For a workstation, she asked her taxi driver to buy a small table. He returned with a rack that looked like it had been designed for eating in bed. With duct tape and some creativity it was pretty good.

Its main site was the Parthenon, the temple of Athena at the Acropolis, an ancient citadel. She woke up at 5 a.m. Besides her driver, she was accompanied by an assistant and a local repairman. They brought with them a rickety rental tripod, ladders and three cameras, two of which were recycled particleboard suitcases Mrs Lutter bought from Woolworth about 25 years ago.

The hotel had not started serving breakfast by the time they left, and eating at the Acropolis is not allowed, so the group worked on an empty stomach. When they arrived, they pushed the equipment up Acropolis hill.

After reaching the top, they attached the camera cases to the top of the tripods and, to guard against the strong summer winds in Greece, stabilized the craft with ropes attached to the ladders.

Hours later, Ms Lutter and her team returned to the hotel to recharge her cameras with the photosensitive paper, which could only be done inside the makeshift dark room.

The group left and returned to the Acropolis around 3 p.m. The forest fires had subsided, but temperatures were still approaching 100 degrees.

She and her assistant had a brief dinner and worked until after midnight. At 5 am, they started again.

Over time, the handle of a camera case broke. A third camera turned out to be too heavy to be used comfortably.

But she met her deadline of September 2.

Back in her Midtown Manhattan studio, Ms. Lutter studied a dozen photos stuck on the wall.

In one photograph, she said, the sun “takes a bite out of white marble.” Another’s long exposure time recorded an alluring contrast between a tree, its leaves blown by the wind, and the Parthenon, among the most fixed man-made objects in the world.

â€œThe predictability of my return with an image,â€ Ms. Lutter said, â€œis much smaller than with any other photographer. But if it works, I’d like to say it’s extremely interesting.

NDSU students to print on 1897 press in Bonanzaville – Fargo Underground

How to use your iPhone or Android as a webcam: it’s actually simple